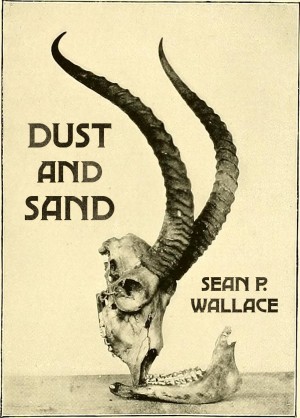 Rated 4.00/5 based on 1 reviews
The Wild West has been tainted by the gods of the Triangle, and few humans can fight the twisted creatures they spawn.

It's a good thing Dust isn't human any more because a Senator's daughter has been captured by a Triangle cult. But even with support from her best friend and a lifelong warrior, Dust will struggle to fight hordes of creatures, mercenaries, and a conspiracy to summon a god...

Sean is a writer, reader, gamer, and a bit of a self-deprecating self-aggrandizer. In his spare time, he just about manages to sleep.

Literary genre fusion is much like culinary cuisine fusion. It can combine to make fantastic new delights, taking in the best concepts of two or more different sources, or it can ruin an otherwise tasty treat, mixing conflicting flavors until the whole thing is a muddled mess. Both of those possibilities wavered in my mind as I cracked open Dust and Sand, a book with fusion concepts from Westerns, horror, and fantasy, and sunk my teeth in. Did Dust and Sand deliver a wonderful new taste sensation or did it go down like its namesake?

Before I answer that question, let us remind ourselves of the Starving Review creed:

I attempt to rate every book from the perspective of a fan of the genre.
I attempt to make every review as spoiler-free as possible.

Let’s start with that answer in broad strokes. Tasty.

The mixing of those three genres actually comes together quite easily in Mr. Wallace’s hands, which may be why I can so nonchalantly say that it was a good meal. The elements are all there, if you think about it. The Western and the fantasy often feature rugged heroes dealing with dangers both environmental and adversarial. The fact that the Wild West *was* untamed and unexplored provides the horror connection through the inherent mystery caused by such a vast untamed space. Horror and fantasy, then, complete the genre triangle with their shared love of supernatural content. Dust and Sand deftly connects those pieces and does so in a solid, imaginative fashion, weaving a well-thought alternate history and deviant United States.

Each ingredient of the genre mix gets its fair share of time in the pot and that leads to a well-blended mix of all three. A lover of any one flavor won’t go lacking and may even develop a taste for the others in the process. Aiding this mix is a solid cast of protagonists. Though the major players are certainly archetypical, they are not cardboard, being fully realized and stepping beyond their core archetypes. All of the main protagonists run a full character arc and the set-up for future tales is handled with aplomb, neither cutting off the first book’s plot prematurely while leaving a clear path to move forward (much like my last review Orconomics).

The action itself is well-paced and well-plotted, vital to an action-heavy piece like this. Also, the overall solid world-building leads to a fairly consistent set of rules in regards to what supernatural elements arise. All of that makes the integration of supernatural things and good old fashioned Western gunslinging come across smoothly and keeps the action moving hot and heavy. For all the action, though, Mr. Wallace isn’t afraid to slow down for important parts to build both character and plot for the next shoot-out, keeping a steady pace for a majority of the book.

Now, you may have noticed that I only mentioned protagonists above. While I did truly enjoy my dinner with Dust and Sand, there were some flaws and the biggest one would be in the antagonists. In big concept terms, the overarching antagonists as they are set up are quite intriguing and will certainly lead to fascinating future adventures. The problem lies in that the specific antagonists for *this* singular volume are fairly uninspired. Most of them are very stock and the one that shows some very intriguing promise doesn’t really follow through with that promise. I wanted to know more about him, about his character, and why he did what he did, but those things are only hinted at before the end of the book with no indication that they will ever be answered. The bad guys are certainly evil enough and threatening enough, but there really only exist as things to thwart and not as full-blown characters so far.

There is one other minor flaw in Dust and Sand, and I do stress this is fairly minor, that comes into play in certain expository sections. For the most part, Mr. Wallace handles the set-up and world-building smoothly, weaving it in with the rest of the story’s events. There are a few parts, however, when one of the characters feels inclined to have a moment of total introspection, info-dumping chunks of history and/or biographical data in a multi-page sequence. Now, these dumps aren’t handled as badly as they could be … while they do disrupt the pacing the couple of times it happens, they do make a degree of sense to have happen at those times, they remain personal remembrances, and still feel ‘in-character’. The fact remains though that, after how well all the other exposition is blended, those few moments stand out sorely.

So, how does Dust and Sand pan out in the end? The book was a delightful treat for me, filling my belly with a tasty blend of cowboys, monsters, and magic that would satisfy a fan of any of those elements. With only a few minor hitches, none of which ruin the book, Mr. Wallace has whipped up an excellent first volume for this book series.

FINAL VERDICT: **** (A delightful blend of Westerns, high fantasy, and horror, with just a few minor bland spots to work through!)

You have subscribed to alerts for Sean P. Wallace.

You have been added to Sean P. Wallace's favorite list.

You can also sign-up to receive email notifications whenever Sean P. Wallace releases a new book.