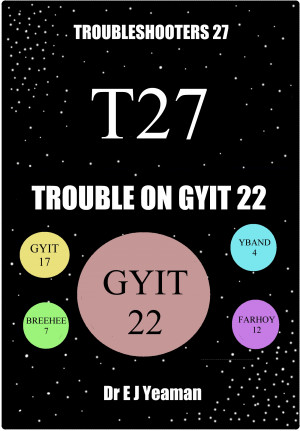 By Dr E J Yeaman
The twin son and daughter of the President of the planet Didia have disappeared. Tony and Bea, young agents of the Galactic Federation, are sure they were kidnapped by the ruler of Gyit 22. But that ruler is a close friend of their boss. (Story length 29 700 words.) More
Hi. I’m Tony. Bea (my girl cousin) and I are agents of the Galactic Federation – Troubleshooters. On our way to meet friends on the planet Didia, we had a dispute with a group of men from Gyit 22. When we finally reached Didia, our friends had disappeared. I was certain the Gyitans had kidnapped them. We went to report to our boss. Who was with him? His friends, the Gyitans. When I accused them, they claimed I was looking for revenge after our earlier quarrel. Our boss believed them. We were determined to rescue our friends, but, with our boss on the Gyitans’ side, we had to take risks.

I retired (early) and started a new career as a writer. I wrote short stories and articles. Some were published; some won prizes; some sank without trace.
Having heard my stories, two friends suggested I should write for children. I’d never thought of that, although I’d spent my first career communicating with young people – as a Chemistry teacher, and running clubs for badminton, chess, table tennis and hillwalking.
I tried writing for young people – and I loved it. It became my main occupation. I sent samples to publishers. One asked to see a complete story. In excitement, I sent it off. Then nothing. After four months, I rang, and was told the manuscript was being considered: I would be notified. Then more nothing. Now, after eight years, I no longer rush to the door when the letter box rattles.
But I kept writing the stories because I enjoyed it so much. Until, in late 2013, I learned I could publish my stories and games as e-books. Since then, I’ve been polishing and issuing some of them. I hope everyone enjoys reading them as much as I enjoyed writing them.
Check out the series:
C: Charades – party game – a new twist to the traditional game.
D: Diagags – party game – gags written as plays for two people.
M: My Story – novels – classical stories, told by the heroes.
O: One-Offs – party game – guess the titles, not quite the classical ones.
P: Pop Tales – short stories – inspired by 60s and 70s hit songs.
Q: Quote-Outs – word games – can you deduce the missing words?
S: Inside Story – novels – a boy’s adventures inside classical stories.
T: Troubleshooters – novels – space adventures for young people.

You have subscribed to alerts for Dr E J Yeaman.

Would you like to favorite Dr E J Yeaman?

You have been added to Dr E J Yeaman's favorite list.