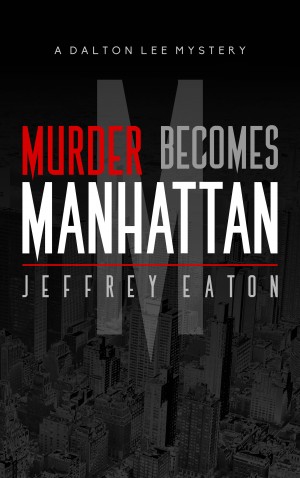 Murder Becomes Manhattan is a creepy, clever, fun-house of a murder mystery that will have readers' hearts racing up to the very moment the murderer's identity is revealed. Why did The Organization kill socialite Caitlyn Drysdale and how did she intersect with their plans for world domination? Clues abound and so do links taking readers to online photos and videos that enhance the book's intrigue. More
A socialite is found strangled to death in an abandoned storage closet deep within one of Manhattan’s grand hotels. The young woman’s murder sets the authorities on edge, but their sentiment shifts from concern to alarm when they spot a familiar calling card on her corpse. The note confirms a sinister cult subdued many years ago is ramping up its crusade to crush the free world from within.

Enter Dalton Lee, head of The Lee Group, one of the world’s premier architectural firms. While studying at Cambridge many years ago, Lee helped bring the anarchists to their knees when he deduced who among their ranks had assassinated a congresswoman. Now that the group is intensifying its insurrection, the authorities recruit Lee to assist them again, knowing he and his associates all now have a personal motive for finding the killer.

A peculiar doorknob, a devious clergyman, a mysterious loft and more than one case of mistaken identity complicate the team’s efforts to determine just who murdered the socialite and why. And the more people they interview, the more suspects they expose.

But just when the team is about to give up hope, Lee weaves together several threads of evidence that reveal the terrifying reason the woman was executed and the identity of her assailant. The killer has been within their sight the entire time…and now has one of Lee’s colleagues within the crosshairs.

Murder Becomes Manhattan is a moody, compelling mystery that provides fascinating stories about the city’s iconic architecture, jaw-dropping plot-twists that will keep readers guessing and a heart-pounding conclusion that will have readers riveted to the final sentence.

Eaton was raised in Kansas. In first grade he and an artistic classmate wrote a letter to Dr. Seuss offering to help the renowned author create his next book, a book Eaton had already given the title, “There’s A Moose on the Loose on the Chickanoose Trail.” The author wrote the ambitious boys a kind rejection letter that encouraged them to keep reading and writing books.

And that Jeffrey Eaton did. His favorite books as a child included The Hardy Boys Series, Agatha Christie novels and “A Wrinkle in Time” by Madeleine L’Engle, whom Eaton unexpectedly met once in New York when he was spontaneously asked to a dinner party by acquaintances. Growing up, he was a huge fan of the William Allen White Children’s Book Award program in Kansas and he even urged librarians to let kids read during the summer months the books named to the award list for the coming year, something not allowed when he was in elementary school. Shortly afterward, the program changed its policy and libraries began to lend out the books to students to read during the summer.

Eaton was graduated from Southern Methodist University in Dallas with a degree in journalism. He instantly put it to use, becoming editor of the university’s alumni magazine at age 23 and editor of the employee publications produced by an international oil company at age 25.

He formed his own free-lance writing business at age 27 and by the age of 30, had been to 45 countries on five continents. Among his most memorable assignments were interviews with a prime minister, a world-renowned heart surgeon, and the CEO of one of South America’s state-owned oil companies.

Now Eaton has returned to his first passion – writing novels. The “Murder Becomes” series unites his love for intrigue with his passion for travel with his excitement for crafting word puzzles, several of which have been published in some of the world’s premier newspapers and magazines. He hopes you enjoy reading these tales as much as he delights in creating them!

About the Series: Murder Becomes

While attending Cambridge University, Dalton Lee cleverly deduced who had assassinated a congresswoman back in his home state of California. His ingenious discovery led to the arrest of a leader in a worldwide terrorist organization intent on bringing down free societies from within. The arrest crippled the organization, causing them to retrench their activities to occasional kidnappings of people who somehow interfered with their plans.

But two decades later, The Organization has restrengthened and has resumed its plans for global domination in numerous cities worldwide. Dalton Lee is now one of the world's pre-eminent architects and he has his associates all have loved ones held captive by The Organization.

Working alongside local and federal authorities, Lee and his team use their cunning, and sometimes dumb luck, to solve the murders undertaken by The Organization and rescue the hostages they consider so dear.

You have subscribed to alerts for Jeffrey Eaton.

You have been added to Jeffrey Eaton's favorite list.

You can also sign-up to receive email notifications whenever Jeffrey Eaton releases a new book.