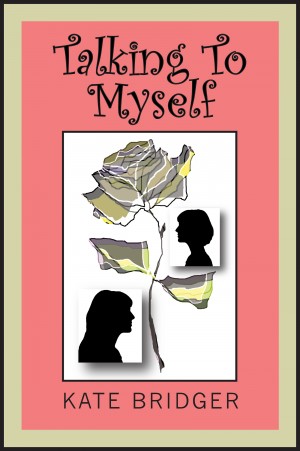 By Kate Bridger
Lyn and Cait’s lives collide for a few months in the fictional town of Calford, BC. Their friendship begins on a rocky footing but evolves into a bond like no other. The two women learn about loves, losses, relationships and life from two very different perspectives but with more in common than expected. More
Lyn is a 55-year-old divorcée returning to the workplace after many years working in her home. Cait is in her early twenties, and just beginning her working life. Forced together in a shared office, their friendship begins on a somewhat reluctant footing but, over time, a deep and fulfilling connection develops.

Cait's fresh approach to life reminds Lyn about her own forgotten youth and how her duties as a wife, mother and 'mature' adult prevented her from fully taking stock of her innate strengths and weaknesses. As the 'grownup' version of Cait, Lyn has learned many lessons about love and life and yet soon realizes that, despite the accumulation of grey hair and wrinkles, some things never change. When she experiences a brief moment of love and infatuation her own behaviour is not very different from a concurrent romantic journey Cait is also suffering through.

During their brief time together Lyn learns her son is gay and that—in her opinion—her daughter is frittering her life away; she reconnects with an old boyfriend only to be hurt a second time; and then, one day, she discovers her time may be running out. Throughout these trials and tribulations, Cait is by her side helping her to build stronger bonds with her grownup children, teaching her to stop being the victim in love and allowing her to accept her physical and emotional weaknesses.

At the same time, Cait sheds some of her edgy youthful cynicism, develops her self-confidence and self-worth—enough to find love with a good man for a change—and comes to appreciate she is, in fact, in charge of her own destiny. She brings humour, compassion and her unique brand of wisdom to their intimate conversations, many of which take place over a glass of wine in a cosy downtown pub. And, when a crisis occurs in Lyn's life, Cait sweeps in to take charge.

Although the two women recognize the similarities between their life stories, their likes and dislikes and even their physical traits, it is not until Lyn is gone that Cait realizes exactly what their connection had represented.

Philosophically, the story of Lyn and Cait shows us that although Fate deals out the deck of probabilities, it is the choices we make in our lives that provide the possibilities. Cait holds the reins on her journey. She doesn't have to remain trapped in either the track she's already walked or the footsteps that preceded her.

I was born in England in the mid-1950s and, with my parents and two sisters, moved to Canada in 1968. We settled in an isolated community a couple of hours north of Ottawa where I completed high school in the nearby town of Deep River before attending the University of Toronto.
I graduated with a degree in Landscape Architecture but soon found my real passion lay in the graphic arts and publishing. In the early ‘80s I was Art Director for Hamilton Cue Magazine—this was back in the day when ‘paste’ literally meant getting messy with dollops of contact cement or hot wax, and when ‘cut’ often required the precision of a scalpel-wielding surgeon. The digital age has since made those antiquated production processes completely redundant.
I took a break from working in print media when my husband, two small children and I left the city and moved to a remote pulp and paper town in Northern Ontario. The winters were long and nasty and the summers were short and buggy; there was plenty of time to pursue new interests. Having always enjoyed working with fabrics, I began making wall hangings for my children’s rooms. When their walls were amply covered, I fine-tuned my techniques, tested the marketplace and developed the art form that I have remained committed to ever since.
We moved to Nelson, British Columbia, in 1994. Two years later, I opened an art and furnishing gallery downtown which, for the next decade, brought all my design, art, marketing and business skills together under one umbrella. I loved it! It was during those years that my decorating consulting business began which, eventually, led to my writing and publishing my first book, Nest Building: A Guide To Finding Your Inner Interior Designer.
I closed Redfern House & Gallery in 2006. Since then—while exploring a variety of other vocations, including retail, ad sales and real estate, as well as travelling and successfully launching my two sons into the world—I have continued to work with my Fabric Art and, in 2013, I published The Fabric Of Nelson, a collection of over 80 pieces of my work depicting life in and around Nelson.
I have always enjoyed writing and the computer/Internet age provided me with the opportunity to test the waters by blogging on a variety of topics … from home décor and job hunting to art and social media. But, there’s always been a novel percolating inside me—two, in fact—and eventually I had to write them.
I published Talking To Myself in 2014 and now I’m ready to launch my second novel, Dear Teddy. Both tales are about love and relationships and they both draw heavily on life experiences … mine or those of people I’ve been around.
As an old-school publisher and layout artist, my steepest learning curve has involved coming to terms with e-books and e-publishing. After decades of fixed print media where every font, image or heading remain exactly where you placed them, it is challenging to come to terms with the movability and fickleness of e-book text and layout. Smashwords has, of course, been my guide and resource guru throughout the journey.

You have subscribed to alerts for Kate Bridger.

You have been added to Kate Bridger's favorite list.

You can also sign-up to receive email notifications whenever Kate Bridger releases a new book.