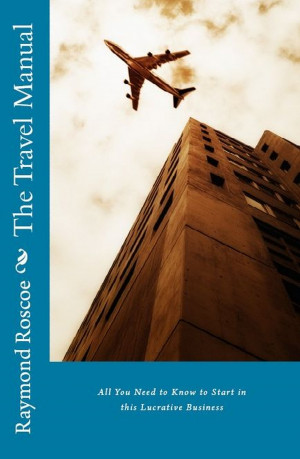 The book is written in such a way that you can use it to setup your own travel agency in any country, teach others how to deal with flight consolidators, add your knowledge to your C.V. for the benefit of future employers or just use it in order to secure flights, etc., for yourself, family and friends or an organization you belong to.

You will learn procedure, travel terms, the phonetic alphabet and much more. This publication still sells as a hard copy for for way in excess of the price on Smashwords but is available as download for a fraction of that price. Your first, car hire, insurance, flight, etc, will more than pay for the purchase cost. This information is like having access to a discount card for travel related products for life!

Disclaimer: Contacts for consolidators are included, though it must be said that phone numbers change and businesses go out of business and new ones start up, so the list although up to date is not guaranteed to be an active list at the time of distribution. In addition, procedures sometimes change too.

Having had a varied working background in hydraulics, motor engineering, press photographer, wedding photographer, industrial photographer I then set up a number of businesses three of which I sold off to competitors as follows.

* Est. in 1988 Cheshire Wipes - manufacturer and supply of cleaning cloths, hygiene, cleaning chemicals, safety equipment, etc. * Customers were the UK mainland, plus I.o.M. and I.o.W, Sold in 2001
* Est. in 1992 Percival Travel - A non-ABTA, non-ATOL travel agency. Arranged long-haul flights, hotel accommodation, car hire, etc to mainly businesses. Sold in 2003
* Est. in 1996 Roscoe Estates - Owned property, revenue was mostly rental - sold 2006
* Est. in 1996 PCI Leisure - built high end business computers to CE Approval status, covered extended warranty and manufacturers warranty for call-out work on all manner of I.T. equipment. Using local engineers and engineers in other parts of the UK. This business was run as a partnership with the help of a colleague for 14 years under the trading name Simple Office Solutions (S.O.S.) work eventually was extended to the maintenance and repair of fitness equipment and was the only company in the North West and North Wales which did such maintenance. In view of the diverse nature of the computer and fitness equipment maintenance, the name PCI Leisure was adopted.

In 2007 I wound down all my business interests as above, so that I could retire early from day to day business activities and turn my attention to writing and publishing books. My first book that I wrote was The Travel Manual. I started this some 20 years ago. It's research took nearly a year. It has now been updated and is selling through Smashwords, all the Amazon websites around the world along with their affiliate sites such as Barnes and Noble, KDP (Kindle). It will soon be available through Google Play and will, therefore, be available for Smartphone, iPad and other Android hardware.

My other book is my father's Thomas Roscoe - War Time Log which is also published through Smashwords, Amazon worldwide, affiliate sites, KDP. Both are available to order through any High Street bookstore. This will eventually be available through other sites such as Blurb, Google Play, etc. I am also searching for an independent film company in the UK or Western Europe to turn it into a Film, Biopic or documentary

There are other books I am working on, one of which is 75% complete and is a true story from 1984 to 1990. It's title and content are secret until I take further legal advice even though I have full rights.

Another book is a comedy joint venture and a true story of the escapades of two friends.

In addition, about 2010, I bought the reproduction rights to around 1,200 business books which, when I get the time, will be looked at, re-formatted and uploaded to the above online distribution networks, some will be free, some there will be a small charge for. These will only be uploaded when I have finished the present projects listed her.

Finally, I was commissioned to travel a great deal to cover photographic assignments for use in written works, magazine, online photo libraries and other publications. Those assignments took me to the Americas - Panama incl. some of its islands, Costa Rica, Columbia and Ecuador, USA Florida, California, New York, Nevada, Kansas, New York State, along with many of the places such as San Jose, San Francisco, Sacramento, Santa Cruz, Los Angeles, Las Vegas, Yosemite National Park and many more. Included also was Western Europe, Eastern Europe such as Lithuania, and Ukraine, Middle East such as Jordan and Israel and many other countries last, but not least of which is the UK. So, it was only natural that I would embark of a series of books about those travels along with over 8,000 photographs in standard definition, HD, HDR and Tone Mapped of the cultures, the architecture, the history, the people and more. My first book will cover Panama, a country close to my heart.

You have subscribed to alerts for Raymond Roscoe.

You have been added to Raymond Roscoe's favorite list.

You can also sign-up to receive email notifications whenever Raymond Roscoe releases a new book.