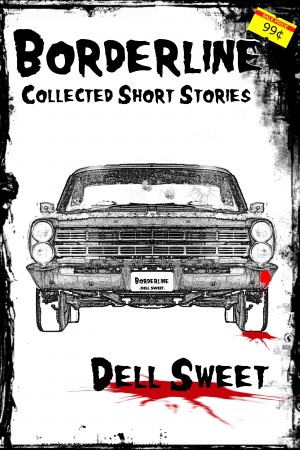 By Dell Sweet
Billy Only intended to go for a walk downtown, look at the lights and the pretty girls, kill some time. It seemed the safest thing in the world. He bent to take a look in the window of the car, two dead men, he had thought, but the driver was not dead, he raised his gun and leveled it on him. 24 hours later as he dug the hole in the desert hard pan he was wondering how it had all gone so wrong. More
Borderline:
He had walked past the mouth of the alleyway twice already. There was someone in the car, just a suggestion of a someone, but someone nonetheless. Wasn't there? Or was it his mind playing tricks on him?
The motor purred softly on the old Ford as it sat in the alleyway, the exhaust rumbling off the brick walls. Just far enough back so as not to attract a great deal of attention, but close enough that it had caught Billy's attention. And the problem with that was it would not let him go. He had to know what the car was doing there.
He thought for a second longer, staring into the dimness, trying to see better. Checked the street; nobody, and then made his way down the alleyway. He bent and looked in passenger window. One man was toppled over into the floorboards of the car, blood pooled beneath him on the seat, and smeared across the seat back. The driver was dead also, he thought, slumped over the steering wheel, but a second later when he started to turn away a cold 45 was Jammed into his face.

Borderline and 16 other short stories by Dell Sweet.

Dell Sweet was born in New York. He wrote his first fiction at age seventeen.

He drove taxi and worked as a carpenter for most of his life. He was honorably discharged from the U.S. Navy in 1975. He has written more than twenty books and several dozen short stories.

You have subscribed to alerts for Dell Sweet.