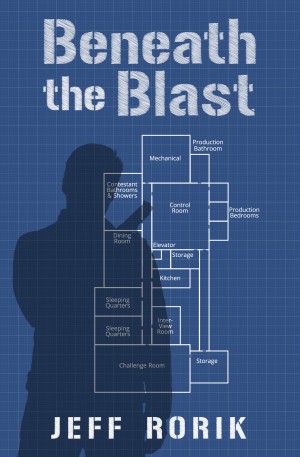 By Jeff Rorik
Rated 4.00/5 based on 1 reviews
A new reality show pits ten contestants against one another, confined to a cramped bunker deep underground. But when the production crew learns that they are trapped with no way of contacting the world above, they are faced with a difficult choice: do they reveal the truth and risk panicking the players, or continue with the increasingly cutthroat game? More
"I’d suggest anyone who enjoys thrillers or reality television to give this one a read... it is a solid, tasty treat." — Musings of a Starving Author

"The way our author goes about showing the different perspectives in these quick views, the layers, and the way it marks time with each chapter, like a countdown, all reminded me of Crichton." — Boom Baby Reviews

"If you like heavy drama, deceit, manipulation, villains and heroes, this is a must read." — Paranormaly Yours

The new reality show, Beneath the Blast, is poised to be the next big hit. Ten volatile contestants will be confined to an underground bunker for one month, during which they will compete physically, mentally, and socially in an attempt to win the one million dollar prize.

The production crew is well aware that their hands are going to be full running the show, but when it comes to light that they too are unable to leave the bunker or contact the surface, the situation becomes far more dangerous. They are faced with a dilemma: do they risk their jobs by calling off the game, or allow the rivalries and infighting to continue?

Beneath the Blast is a fast-paced and suspenseful drama that delves into the minds of every character trapped within the bunker. As tensions mount, their greatest challenge proves to be holding onto their sanity. Only one outcome is certain in this relentlessly gripping page-turner: anyone who does manage to escape will be forever changed.
Download: epub mobi (Kindle) pdf more Online Reader
lrf pdb txt
Price: Free! USD
Add to Library
Create Widget
Tags: psychological competition tv television trapped page turner reality tv reality television tense gameshow
About Jeff Rorik

Jeff Rorik is a Canadian author, currently living in British Columbia amidst the many trees that infest the province. When he's not writing, he can usually be found herding chickens, fixing computers, or trying to find his next musical obsession. He also enjoys procrastinating, but rarely finds the time for it.

You can find him online at wwww.jeffrorik.com

One of the great things about digging through my pantry is the great variety of dishes that are contributed to it. There’s always something new, something innovative, some creative new take on an old dish out there to be found. Today’s meal is one of those creative dishes, combining some classic aspects of conventional thrillers, a dash of Lord of the Flies, and reality television. Will this be good, bad, or just ‘meh’?

Before we find out, let’s unfurl the ancient scrolls and consult the Starving Review laws:

It turns out that reality television is a lot easier on my creative palate when it’s wrapped in a layer of meaty thriller. Mr. Rorik finds an interesting way to use the stilted, often manufactured environment of your average reality TV show to both set the stage and heighten the tension of the plot to come. When you have a group of people who are not only in competition, but chosen specifically to create a dramatic situation for television, the amount of dramatic tension to be milked to spice up the recipe multiplies.

Of course, that drama sets down squarely on the shoulders of the characters. If those core ingredients don’t pan out, the entire drama souffle will collapse. Overall, Blast brings a varied and fleshed-out cast of characters. Interestingly, this is accomplished with rapidly-shifting swirls of characterization, sliding from character to character for short scenes before moving on to the next.

You might be concerned that this could cause a breakdown of the plot. After all, if every character gets their swirls in the mix, doesn’t that tells us all about our antagonists’ plans? Again, credit the chef here for providing an expert hand here. While there are character scenes that foreshadow things to come, it stops there at foreshadowing. I can’t remember a single scene ruined by the characters revealing the menu too early.

The flaws in Blast are minor, but do leave their sourness on the cake. Firstly, the start of the tale is a bit clunky. As the cast is rather sizable, it takes some time before the story really gets going to let us get a bead on each of them and that leads to a bit of early fatigue from such a heavy first course. Once Blast gets to the main course, though, it goes down quite smoothly, but the early pacing is still off.

My other bit of critique would be in the plot device to get the whole ball rolling to start with. As this is a very early occurance, I don’t think this is SPOILERS, so let me extrapolate: The main premise is a reality show cast that winds up trapped in the bunker their show is set in. Part of the explanation for being trapped makes sense, the part that happens in the first few chapters, but the final explanation given stretched the bounds of my suspension of disbelief. As it happens right at the very end and didn’t QUITE break it, I was able to swallow it down, mainly as it really didn’t affect the resolution of the plot, but it was still a sour note at the end.

However, let me sum up by saying that the real, actual dramatic plot resolution is actually quite good. Overall, Beneath the Blast is a spicy, tasty mix of thriller and reality television, with just a few minor flaws marring the recipe. I’d suggest anyone who enjoys thrillers or reality television to give this one a read. Anyone else who would just enjoy a good read might also want to give this one a go, as it is a solid, tasty treat. Enjoy and good reading, good writing, and good luck!

FINAL VERDICT: **** (A spicy, tasty mix of thriller and reality television, with just a few minor flaws marring the recipe!)

You have subscribed to alerts for Jeff Rorik.

You have been added to Jeff Rorik's favorite list.

You can also sign-up to receive email notifications whenever Jeff Rorik releases a new book.