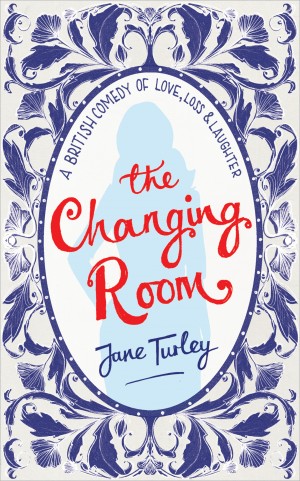 The Changing Room; A British Comedy of Love, Loss and Laughter

By Jane Turley
Sandy Lovett is a mother,carer and sex-chat expert. Read about her chaotic life in The Changing Room - a comedy-drama for all those whose glass is half-full. Preferably with gin and a big fat cherry! More
"Today, I am in the changing room of my life and tomorrow, win or lose, I'll move forward a stronger and wiser woman."

Sandy Lovett's confused mother and chaotic life are having an effect on her waistline. She knows she needs to change her life but doesn't know how until she buys a risqué dress which sets in motion a sequence of life-changing events. After years as a mother, carer and full-time employee, Sandy quits her job and places her mother in a care home, and life seems on the up. But disaster is never far away for the hapless Sandy as her mother’s obsessions continue to wreak havoc and her husband’s business begins to fail. Short of cash and needing a flexible job, Sandy joins a sex-chat service. At The Beaver Club Sandy discovers a talent for selling telephone sex - a skill she later regrets when she meets unscrupulous local politician and prospective MP, Trewin Thackeray.

The Changing Room is a comedy-drama for all those whose glass is half-full. Preferably with gin and a big fat cherry!

The Changing Room has an additional book club section featuring discussion points and an author Q & A.

Jane Turley has written for the BBC and the literary magazine The View From Here. She also writes the long-standing humor blog The Witty Ways of a Wayward Wife. The Changing Room is her début novel.
Available ebook formats: epub
Price: $3.99 USD
Buy Add to Library Give as a Gift
How gifting works
Create Widget
Tags: love drama comedy humour slapstick sex and marriage family humour alzeheimers
About Jane Turley

Jane was born in a remote village in the Malvern Hills in England a long, long time ago. So long ago, that Jane sometimes now forgets where she lives and where she has parked her car. She is, however, very friendly with her local police officer.

Whilst still a baby, Jane moved to the seaside resort of Weston-super-Mare, on the borders of Somerset, where she spent years gazing forlornly out of her Silver Cross Pram. Her excessive exposure to salty air and seagull poop left her deeply traumatized and possessing a bizarre sense of humour. She now inflicts her dubious wit on everyone, including passing strangers, scarecrows and stray dogs. She hasn't been invited to dinner since 1982.

When Jane was young and ambitious she aspired to be an actress but, one day, her life changed forever when she met a tall handsome stranger. Unfortunately, the stranger walked off and Jane married someone else in a fit of pique. Luckily, he turned out to fairly normal and Jane did the family thing and gave birth to three annoying sons. Since then Jane has been scrubbing saucepans and toilet bowls and gazing out her kitchen window fantasying about writing novels.

After many years and even more chocolate-chip cookies, Jane finally completed her first book, A Modern Life. Jane's husband was delighted he would no longer have to hear her waffling on about it and threw his hands up with relief. Jane cried with happiness. After they'd celebrated, Jane told her husband even better news; she didn't have writer's block and had an idea for a full-length novel. At which point, Jane threw up her hands with relief and he cried. Somehow they are still married.

There is a lot more to tell about Jane. You can find her at her blog, The Witty Ways of a Wayward Wife. A place where she talks. A lot.

Reviews of The Changing Room; A British Comedy of Love, Loss and Laughter by Jane Turley

You have subscribed to alerts for Jane Turley.

You have been added to Jane Turley's favorite list.

You can also sign-up to receive email notifications whenever Jane Turley releases a new book.