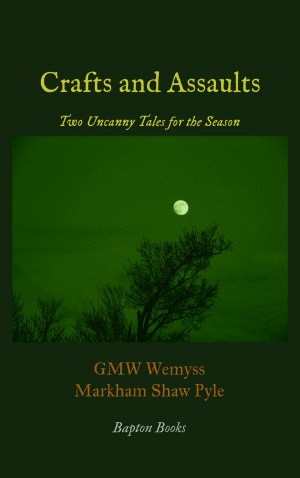 Crafts and Assaults: Two Uncanny Tales for the Season

Markham Shaw Pyle and GMW Wemyss are Bapton Books’ noted historians; critics; and annotators of classic works, who – on a seasonal wager as their coming history of the July Crisis of 1914 was wrapping up – decided to reward their loyal readers with a story apiece, as ‘unco’ uncanny’ as they felt they wished to be.

Prepare to leave the lamps on when you try to go to sleep. More
It’s ‘the time of year when the English-speaking peoples, not without an assist from their Celtic connexions, tend invariably towards the haunted and the grotesque in their tales and anecdotes’; and rather than allow that season to pass without something to offer our readers from the very beginning of it, Mr Pyle and Mr Wemyss made a wager on the Saturday before All Hallows’ Eve: a story apiece, as ‘unco’ uncanny’ as they felt they wished to be.

The novelist, West Country essayist, and historian GMW Wemyss returns us to the dark, deep woods of Wiltshire at night, older than Stonehenge, where dark deeds are afoot – until interrupted by the well-loved ensemble cast of his Village Tales series, led as ever by the indomitable (and exasperating) duke of Taunton and the Muscular Christianity of the Rector, Fr Noel Paddick. (Apparently, a case of possession can, actually, be stopped by a brilliant throw in to the wicket. Sometimes....)

And Markham Shaw Pyle, the historian and critic, then takes us out ‘West of One-Hundredth’, to the Big Empty of rural Texas, where anything might happen: and does happen, posing a problem of law and ethics, and the howling question, ‘When does the beast crowd out the man?’

From the Eve of All Hallows to Christmas of the Dickensian ghost stories, this is the season of the uncanny and the strange; and this volume is as near to a gift as the authors can contrive, in hopes that their loyal readers ‘may be, for a moment, if no more, diverted and amused with what is, after all, the merest trifle … as they await more substantial fare, quite soon’.
Available ebook formats: epub mobi pdf rtf lrf pdb txt html
First 20% Sample: epub mobi (Kindle) lrf more Online Reader
pdb
Price: $0.99 USD
Buy Add to Library Give as a Gift
How gifting works
Create Widget
Tags: halloween texas short stories werewolves west texas church of england wiltshire uncanny stories about horror
About GMW Wemyss

Parliamentary historian, chronicler of Titanic’s sinking and Churchill’s ascent, annotator of Kipling and of Kenneth Grahame: GMW Wemyss lives and writes, wisely pseudonymously, in Wilts. Having, by invoking the protective colouration of tweeds, cricket (he was a dry bob at school), and country matters, somehow evaded immersion in Mercury whilst up at University, he survived to become the West Country’s beloved essayist; author or co-author of histories of the Narvik Debate, the fall of Chamberlain and the rise of Churchill, of 1937 – that year of portent – and of the UK and US enquiries into the sinking of Titanic; and co-editor and co-annotator of Kipling’s Mowgli stories and Kenneth Grahame.

Reviews of Crafts and Assaults: Two Uncanny Tales for the Season by GMW Wemyss

You have subscribed to alerts for GMW Wemyss.

You have been added to GMW Wemyss's favorite list.

You can also sign-up to receive email notifications whenever GMW Wemyss releases a new book.