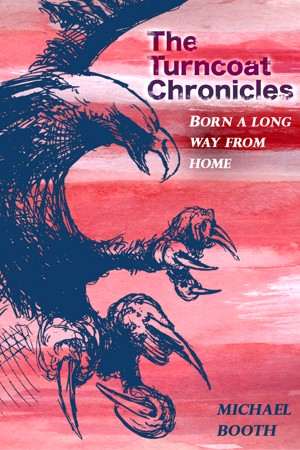 By Michael Booth
Rated 5.00/5 based on 3 reviews
The Turncoat Chronicles is the non-fiction story of a young man, born and raised in the U.S.A., who went looking for a better place to live--and found it in Spain. The narration weaves its way between the human-centered Spanish "estilo de vida" and the American way of life he left behind. It includes a critical look at what the United States has become over the past four decades.

Michael Booth, author of The Ebook Ebook, is a US-born expatriate journalist and online fine-art-printmaking publisher who has lived in a Spanish village in the foothills of Sierra Nevada for the past four decades. His interest in electronic publishing is recent, but he was bitten hard, and when he noticed that there was as yet no disinterested guide to ebook publishing resources, he decided to sit down and research and write The Ebook Ebook.

His other ebook-related sites are:

* The Ebook Crew (http://ebookcrew.ning.com), a real-time networking site for actual and aspiring ebook author/publishers.
* Ebook Latest (http://ebooklatest.wordpress.com), a blog site for keeping up to date on the latest developments in the world of ebooks.

Elaine Klaassen on Apr. 24, 2011 five stars
Mike has an enormous, tremendously forceful personality. He’s an action guy. You need to move a piano. No problem. He’ll be right there with his truck. He sees what needs to be done, knows how to do it (or can figure it out) and is willing to do it. He trusts his instincts, has faith in himself and searches for the truth. I know this from knowing Mike in real life. And it’s all in the book, plus more. In the book I saw clearly how much joy and delight he takes in life, and that is just plain inspiring. There is lots of humor in the book, too: Sometimes I laughed out loud, and sometimes just chuckled or smiled. The personal narrative about leaving the U.S., becoming a Spanish citizen, and creating a family with Maureen is absolutely fascinating. On top of everything else, there is a lot of information in the book, such as little known aspects of U.S. policy in other countries, the unacceptable Israel-Palestine situation, Spanish daily life and culture, and wild life. The discussions about animals and the natural world created an especially interesting thread. I loved reading this story. Every day I couldn’t wait to finish all my obligations so I could get back to this extraordinarily vivid book.

You want sincerity? Turn to Mike Booth.
You want pungent views? Mike has them.
You want thought-provoking insights? Listen/read Mike Booth.
The Turncoat Chronicles is witty, critical, provocative. It makes you think again, makes you re-examine your prejudices and your thoughts about a whole range of subjects.
Mike may infuriate you. But you have to agree: he's an original.

The Turncoat Chronicles is interesting, entertaining, and well-written. The narrative lends itself well to e-book format, with instant links to prove a point or add something to the topic. The author even includes a recipe for paella and ends with a “how-to guide” on becoming an ex-pat. And the whole thing makes for thoroughly enjoyable reading. I was following four stories as I scrolled along. Each one is very entertaining, and capable of standing alone.

First, there are the travels of a small-town American boy who embarks on a journey of discovery. Along the way he observes and learns, and tells us about it. He ends up in Andalucía where he makes a living through his entrepreneurial skills to support a family, apparently having disproved Thoreau’s claim that “most men lead lives of quiet desperation”.

Second, there is the Spanish version of “A Year in Provence”. I found the day-to-day life fascinating as the author lived through Spain’s “modernization”. Spain must have seemed primitive when he first arrived in the Sixties, trying to make a household with an instant family and no running water.

Third, the author’s skills at description create a third book in the form of a travelogue of Spain. I was particularly interested in the changes that have occurred in the author’s neighborhood. I assume this represents what has happened all over Spain.

And finally, there are the political “tirades” (the author’s own word), which show the evolution of his decision to become a Spanish citizen. He sees the United States “from a distance”, and describes, warts and all, what only an ex-pat can see in American culture.

I read The Turncoat Chronicles as an autobiographical picaresque novel. The author leaves his Midwestern small town and sets out on a journey. He goes to college, is drafted into the Army, sees the American west, goes to Europe, ends up in Spain, meets a married English woman, falls in love, adds a son to their blended family, and decides he is no longer American. He is a Midwestern Candide who finally discovers “the best of all possible worlds” in Grenada.

My only other comment is that I don’t recall in the paella recipe if he included the chicken claw that I recall appearing from the bed of yellow rice as you pick your way through seafood and chicken. Other than that, The Turncoat Chronicles is a thoroughly enjoyable journey.

(In full disclosure… I went to high school with Mike Booth, and his book answered my question: What have you been doing the last 50 years?)

You have subscribed to alerts for Michael Booth.

You have been added to Michael Booth's favorite list.

You can also sign-up to receive email notifications whenever Michael Booth releases a new book.