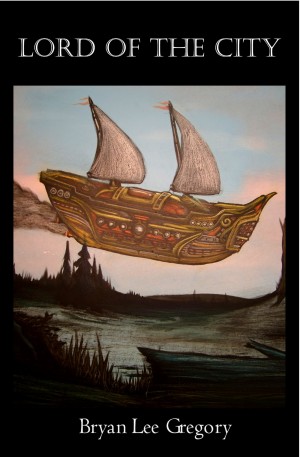 Lord of the City

Now the City is running out of the only resource that can keep its enemies at bay. Kenton is sent out into the world with the City's most valiant defenders on a revolutionary aircraft on a desperate mission to find a weakness in the Bladesmen's defenses. Soon he discovers that it is only a matter of time until the City falls forever. Only the human mission on board the zeppelin Lord of the City can hope to find a way to save the last remnants of humanity before their time runs out.
Available ebook formats: epub pdf rtf lrf pdb txt html
First 20% Sample: epub lrf pdb Online Reader
Price: $4.99 USD
Buy Add to Library Give as a Gift
How gifting works
Create Widget
Tags: adventure fantasy flight airship zeppelin
About Bryan Lee Gregory

Bryan Lee Gregory is an author of fiction that blurs the lines between high fantasy and steampunk. He grew up in the Pacific Northwest and currently lives in Beaverton, Oregon with his wife and son. Bryan has been creating new ideas for stories from a young age and has been turning those ideas into novels since 2009.

When not writing, Bryan works professionally in the software development industry. He graduated from The Evergreen State College in Olympia, Washington in 1999.

Bryan has written the first two novels in his Bladesmen Lords series and is about to release the third. Lord of the City and City of the Lords are both available now as eBooks or trade paperbacks, while Worlds of the Lords will be available in October, 2014.

Bryan can be contacted via email at bryan@bryanleegregory.com.

Find out what he's up to at http://bryangregory.blogspot.com!

Reviews of Lord of the City by Bryan Lee Gregory

You have subscribed to Smashwords Alerts new release notifications for Bryan Lee Gregory.

You have been added to Bryan Lee Gregory's favorite list.

You can also sign-up to receive email notifications whenever Bryan Lee Gregory releases a new book.