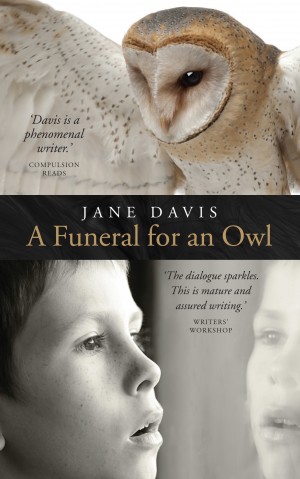 A Funeral for an Owl

By Jane Davis
Twenty years of change, One person who cares

What kind of a boy would it take to convince two high school teachers to risk their careers? More
‘… reminds me of being inside a kaleidoscope; colourful, surreal, real, poignant and offering an ever-changing, intense view of what it means to be human.’ Amazon Reviewer.

Twenty years of change. One person who cares

A photograph of a barn owl in flight.

“The wings, all spread out and that? They’re kind of like an angel’s.”
He’s right.It’s Aimee’s owl, Aimee’s angel.

Times have changed.
Jim Stevens teaches history. Haunted by his own, he still believes everyone can learn from the past.

14-year-old Shamayal Thomas trusts no one. Not the family, not the gang. And at school, trusting people is forbidden.

“If you decide you gotta pick up that phone, you tell me first so that I can disappear myself. Because I ain’t havin’ none of that.”

The best way to avoid trouble, thinks Ayisha Emmanuelle, is to avoid confrontation. As an inner-city schoolteacher, she does a whole lot of avoidance.

One shocking event – a playground stabbing – leaves a life hanging in the balance. Two teachers risk their careers to help a boy who has nothing.
Three worlds intersect and connect, regardless of the rules.
History doesn’t always repeat itself.

A powerful exploration of the ache of loss set in a landscape where broken people can heal each other.

‘All the heartbreak of A Kestrel for a Knave (Kes) and then some. Imagine Billy Casper living in South London in the 1990s.’

Praise for A Funeral for an Owl

‘The dialogue sparkles. This is mature and assured writing.’ Writers’ Workshop

‘Jane Davis has the insight and sensitivity of a great writer.’ Awesome Indies

‘Jane reminds me of Margaret Atwood, in that all her books are very different and seem to be written in different voices. The quality and readability is consistent in all her works and I would heartily recommend this grittier tale of modern urban living.’ Peter Snell, Bookseller

‘If you want to laugh and cry and stamp and cheer – all in the space of a few hours of reading – then this book is one for you. Highly recommended.’ Bookmuse

‘Everything about this novel surprised me – from the title to the final page it was a joy.’ Gillian Hamer

Jane Davis is the author of nine thought-provoking novels. Her debut, Half-truths and White Lies, won The Daily Mail First Novel Award and was described by Joanne Harris as ‘A story of secrets, lies, grief and, ultimately, redemption, charmingly handled by this very promising new writer.’ The Bookseller added her to their 'One to Watch' section. Compulsion Reads have called her 'a phenomenal writer whose ability to create well-rounded characters that are easy to relate to feels effortless'. She has since published six further novels, These Fragile Things, I Stopped Time and A Funeral for an Owl, An Unchoreographed Life, An Unknown Woman (awarded Self-Published Book of the Year 2016 by Writing Magazine and the DSJT Charitable Trust) and My Counterfeit Self. Most recently, her novel Smash all the Windows won the Selfies (Best Independently-Published Work of Fiction) Award 2019. Jane's favourite description of fiction is 'made-up truth'.