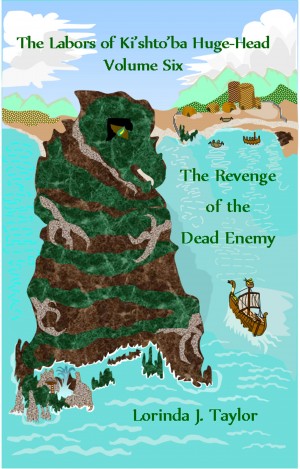 The Labors of Ki'shto'ba Huge-Head: Volume Six: The Revenge of the Dead Enemy

By Lorinda J Taylor
Rated 5.00/5 based on 3 reviews
As the Quest for the Golden Fungus makes its way westward, the Champion of Peace must confront an old foe before certain prophecies can be fulfilled, bringing the Labors of Ki’shto’ba Huge-Head to an unexpected and tragic end. More
In this final volume of The Labors of Ki’shto’ba Huge-Head, the Quest ship makes its way westward, passing the Point of the Monster and heading into uncharted seas. The Questers visit the fortress of Thai’no’no’gwai, where to their astonishment they find an entire citizenry composed only of female Alates. After barely escaping with their lives, Is’a’pai’a, Ki’shto’ba, and the Companions make off with a fertile female, who becomes Mother to the ship’s fertile male Vak’wum’a.
Following a peaceful interlude at the fortress of No’chet Li’lo’akh, the pace intensifies. One of the Companions is lost in a battle with pirates. Later, at the fortress of Kwi’thaim’chet, Ki’shto’ba experiences the second unexpected sorrow that was foreseen in the World Beneath, while Ti’a’toig’a the Twin is forced to fight a battle to the death.
The Questers arrive next at an island where an aged Seer is imprisoned, and Ki’shto’ba must engage an old foe in a final confrontation. The Huge-Head is victorious, but it is gravely injured. Even as its body is beginning to heal, certain prophecies are fulfilled, bringing the Labors of Ki’shto’ba Huge-Head to an unexpected and tragic end.
Available ebook formats: epub mobi pdf rtf lrf pdb txt html
First 20% Sample: epub mobi (Kindle) lrf more Online Reader
pdb
Price: $2.99 USD
Buy Add to Library Give as a Gift
How gifting works
Create Widget
Tags: adventure fantasy science fiction epic fantasy extraterrestrials mythology hercules epics quest for the golden fleece quest tales
About Lorinda J Taylor

Having read the other five books of the Ki'shto'ba series, I'm happy to say this final volume maintained the quality of its predecessors. In addition to thrilling adventures and well-developed characters who have become "book friends," is added an element of sorrow and tragedy as Ki'shto'ba's story reaches its end. Again, I heartily recommend the entire series (read in order) to readers who appreciate an epic tale eloquently told, with themes that resonate in real human life. I never would have believed that a long story about extraterrestrial bugs with peculiar names would have engaged and moved me to the extent that all these books have. I salute Lorinda J. Taylor as a master storyteller (or perhaps she might prefer Remembrancer). P.S.: there's a sequel to the series, which I'm planning to read asap.

So you think you can't empathize with a giant termite? We've had many insectoid and arachnid heroes in literature. Consider "Charlotte's Web." If you didn't get teary-eyed when Charlotte died, then you must have a heart of stone. Other stories empathetic toward multi-legged creatures: Ant Bully, It's a Bug's Life, Bee Story. I'm sure there are others. I don't usually seek out books about bugs, but I could come up with these examples in a few seconds.

So, what about the entire epic journey "The Labors of Ki'sh'toba: Volumes 1-6?" I have previously reviewed 1-5, not to mention the 2-volume "Termite Queen" saga. I liked them...a lot. I continually complained about the difficult names, places, and concepts with the conlang (constructed language) of the Termite world. Too many apostrophes and a bunch of other punctuation I have no clue how to pronounce.

I will complain no more. I still can't pronounce 90% of the termite language, but I can visually recognize the names of the main characters. All have become familiar and lovable in their own ways. Di'fa'kro'mi, the Remembrancer (story teller) is quite an adept author considering he had to invent a written language in which to tell the tales. I know, the real Remembrancer is Lorinda Taylor, but she is such a wonderful writer, I was immersed in the stories as if they were really told by Di'fa'kro'mi.

As I did when first reading "Charlotte's Web," I wept over the death of some of my favorites throughout the entire six volumes. I cried for termites? Yes, I did, and I'm not ashamed.

The entire tale of Ki'shto'ba and his labors (modeled on the Greek Hercules myth) is hard to get into, but an epic worthy of the difficulty of the journey.

I completely and thoroughly recommend the entire six volumes. But you might want to start with the Termite Queen books to allow yourself to ease into the idea of termite heroes.

Of all the books in this series, this is the one I dreaded reading.
Why?
There are a lot of prophecies fulfilled, resulting in the loss of great companions and it is the last book of the series.
However!
The final few chapters not only gripped me with sadness, they helped me reconcile with the losses (Ki'shto'ba's final moments were an astounding fulfilment of a prophecy AND achieved the 12th and final Wonder in a way that is unparalleled by any Shi'Shi) AND gave me hope that another remarkable series may be penned by the author....
I certainly hope so...