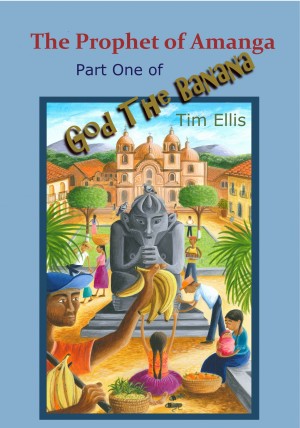 By Tim Ellis
Rated 4.00/5 based on 1 reviews
When the bright young graduate Benjamin Bremmer arrives in the mysterious tropical island republic of Amanga, he is seeking some purpose to his life. Unbeknownst to him, the evil local deity Imti Mentoo has already decided Ben's purpose. This is the first of the three-part epic sonnet sequence, God The Banana. "...shocking, hilarious and sometimes unsettling..." - Amazon customer review. More
"...an incredible feat of literature: a genuine page-turner..."
"...an amazing book...the underlying narrative voice and tone is very consistent all the way through...a very good yarn."
"...outrageous and bawdy verse novel...shocking, hilarious and sometimes unsettling..."
"I felt the eyes of Imti Mentoo watching my every move. And you know what? I kind of liked it."
- customer reviews of God The Banana on Amazon.

When the bright young graduate Benjamin Bremmer arrives in the mysterious tropical island republic of Amanga, he is seeking some purpose to his life. Volunteering at an orphanage in the poverty-ridden capital city, Ben meets and falls in love with Teri, a beautiful but pious fellow worker. The couple journey bravely into the remote heart of this forbidding country, but unbeknownst to Ben the evil local deity Imti Mentoo has already decided his purpose. This is the first of the three-part satirical epic sonnet sequence, God The Banana.
Download: epub mobi (Kindle) pdf more Online Reader
rtf lrf pdb txt
Price: Free! USD
Add to Library
Create Widget
Tags: environment god poetry messiah prophet god and science satire and religion backpacker travel adventures satire and politics
About Tim Ellis

Tim Ellis lives in Harrogate, North Yorkshire in the UK, where he runs a small gardening business. He is fascinated by wildlife, especially birds, and with his partner the artist Robbie Burns he has travelled around much of the world seeking out the rare and the beautiful.

As a poet he divides his talents equally between page and stage. His first book was a collection of 40 sonnets around a theme of birds called Birds of the World in Colour, published by Flarestack in 2004, and his second book was a poetic journey through Latin America called Gringo on the Chickenbus, published by Stairwell Books in 2011. On Smashwords he has self-published two "verse-novels", On The Verge and God The Banana, the latter in three parts called The Prophet of Amanga, The Temple of the Monkey, and The Evil of God.

His poems have appeared in several magazines including The Dalesman, Orbis and the Poetry Society’s Poetry News. He has won many prizes including 1st prize in the 2011 Huddersfield Grist Poetry Competition.

On the performance side, he is a well known face at slams, festivals and Open Mics throughout the North of England. He is a previous winner of the Ilkley Literature Festival Open Mic Competition and in 2011 he won the first York Poetry Slam. He can occasionally be found at poetry events in York and Leeds, but his principal haunt is Poems, Prose and Pints at the North Bar in Harrogate. 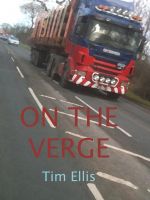 Very compelling imagery and a captavating story, a must-read for anyone with a passion for the form.

You have subscribed to alerts for Tim Ellis.

You have been added to Tim Ellis's favorite list.

You can also sign-up to receive email notifications whenever Tim Ellis releases a new book.