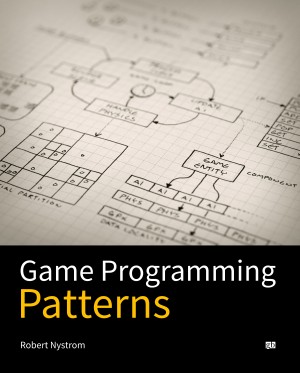 By Robert Nystrom
Based on years of real-world experience shipping AAA games, Game Programming Patterns collects proven tools to manage your game's complexity, make progress on it quickly, and optimize its runtime performance. More
The biggest challenge facing many game programmers is completing their game. Most game projects fizzle out, overwhelmed by the complexity of their own code. Game Programming Patterns tackles that exact problem. Based on years of experience in shipped AAA titles, this book collects proven patterns to untangle and optimize your game, organized as independent recipes so you can pick just the patterns you need.

You will learn how to write a robust game loop, how to organize your entities using components, and take advantage of the CPUs cache to improve your performance. You'll dive deep into how scripting engines encode behavior, how quadtrees and other spatial partitions optimize your engine, and how other classic design patterns can be used in games.

Robert Nystrom has programmed professionally for twenty years, about half of which is in games. During his eight years at Electronic Arts, he worked on behemoths like Madden and smaller titles like Henry Hatsworth in the Puzzling Adventure. He's shipped games on the PC, GameCube, PS2, XBox, X360, and DS, but is most proud of the tools and shared libraries he created for others to build on. He loves seeing usable, beautiful code magnify the creative ability of others.

Robert lives with his wife and two daughters in Seattle where you are most likely to find him cooking for his friends and plying them with good beer.

You have subscribed to alerts for Robert Nystrom.

You have been added to Robert Nystrom's favorite list.

You can also sign-up to receive email notifications whenever Robert Nystrom releases a new book.