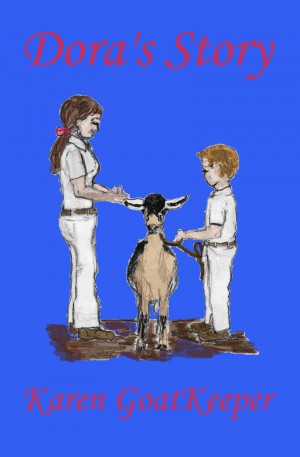 By Karen GoatKeeper
Rated 4.00/5 based on 1 reviews
Dora is a goat. To Emily Dora is a best friend and way into the world of goats. For Leonard Dora is a companion to help him cope with the loss of his livestock and failing health. For Miranda and Susanna Dora is a betrayer yet possibly a savior. To Shawn Dora is a way to be like his older siblings. Dora is just a goat, or is she? More
Dora is an Alpine/Nubian cross dairy goat. She touches and changes many lives.
Emily needs a friend. Dora becomes that friend and introduces her to the world of dairy goats. But Dora is a grade goat disliked by her mother.
Leonard has raised cattle all his life. Now he is old and sick. His cattle are sold. The pasture looks so empty. Dora becomes his pet and companion filling the pasture with new life helping him cope with his losses and failing health.
Miranda and Susanna are normal girls who want the things their classmates have. They don't have the money to buy them. Dora betrays them yet might help them rethink some bad decisions.
Shawn is the baby of his family. He wants to show goats like his siblings but is too young. Dora shows him the way.
Dora is just a goat. But to these people and those around them, Dora is much more.

Tongue Twisters. I've always been fascinated by them. English is special for tongue twisters, alliteration and other word plays.
Then there are my Nubian dairy goats. Goats in general do some crazy things.
The result is "For Love of Goats" just out. Read it aloud, if you dare. Or sit back and enjoy the watercolor illustrations and humor.
Writing is a passion, an addiction, and I enjoy indulging it. My topics range from nature (Exploring the Ozark Hills - a book of nature essays and photographs - and "My Ozark Home" - nature photographs and haiku) to science (The Pumpkin Project - botany investigations, puzzles, stories and more about pumpkins) to novels.
Goats are popular subjects in "Goat Games" - puzzles, stories and more - and the novels "Dora's Story" - the life of a dairy goat - and "Capri Capers" - a blend of 1930s movie serial and melodrama. Bullying is dealt with in the three Hazel Whitmore books - "Broken Promises", "Old Promises" and Mistaken Promises" - "Edwina" - with a touch of fantasy - and "Running the Roads". These are all upper middle grade to beginning young adult.
There are so many story ideas out on my hills. This next year will bring more, but in a different form. Science fiction - "The Carduan Chronicles" - will bring an alien invasion into an Ozark ravine. Hopefully released Fall, 2020.
Water is the science topic. "The City Water Project" is filled with investigations, activities (ever shoot off a water rocket?), puzzles and stories about how people get, use and dispose of their water. Hopefully this is released in March, 2020. And, yes, "The Wild Water Project" is in the planning stages.
My pen name is in honor of my Nubian dairy goats. My goats have shared my life for over 45 years now. I have a flock of chickens and 5 cats as well as a vegetable garden.
A degree in zoology and several years teaching science seems to slide into my books too. Knowing more about why nature works the way she does makes what I observe more special.
Country living may not be for everyone. It is the way for me. Visit my website to find out more about country living and my goats. 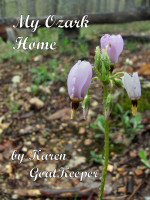 As someone in our Goodreads' Fairy Godreaders reading group noted, this is a tale Charles Dickens might have told if he were a goat. But it's more than merely a Great Expectations story of the changing fortunes of Dora, a young doe with a lot of potential who's stymied by her mixed parentage and not a little bit of jealousy.

It's probably meant for school-age readers, but it's a very good thing to read if you're a crunchy granola, back to basics, let's take charge of our food-sourcing kind of person who occasionally has a hankering to raise goats. You'll learn that it's doable, and can be enjoyable, but it takes a lot of help, support, and knowledge - not to mention a few tough choices about separating - even selling - kids from their mothers to be feasible.

The author really does raise goats and has done so for a number of years. She's a retired science teacher, so I'm sure her facts on farming, animal husbandry, and general knowledge of the natural world are trustworthy. She has a lovely website where you can sigh over baby goats from afar. I got the feeling that she's not quite as up-to-date with current teens and their preferred technologies and conversation patterns, but then again, neither am I. There are a few confusing spots in the book itself in terms of dialog flow (especially during phone conversations) and some of the characters felt the need to notice racial identities that seemed to have no relation to the plot as far as I could tell. It wasn't meant to be derogatory, though one character did need to evolve in his ideas, but it just seemed to be a little apropos of nothing. Then again, I don't live in that area so perhaps this is part of the local experience.

In any case, if you can imagine yourself out on Karen GoatKeeper's spread in the Ozark mountains, this seems like just the kind of story she'd be telling you, spinning out the next installment on the spot of the trials and traumas of a sweet and plucky little goat, to keep you from wandering away when you're supposed to be milking or putting out fresh feed.

You have subscribed to alerts for Karen GoatKeeper.

You have been added to Karen GoatKeeper's favorite list.

You can also sign-up to receive email notifications whenever Karen GoatKeeper releases a new book.