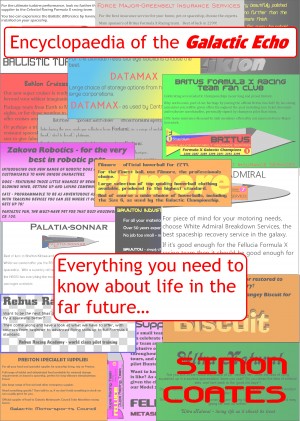 Encyclopaedia of the Galactic Echo

By Simon Coates
Everything you need to know about life in the far future... welcome to the Galactic Echo. More
An invaluable guidebook to anyone of fans of the Galactic Echo concept, looking at all aspects of life in the far future. Includes details of the projects that made Mars and the Moon habitable, life on a spacestation, sports, including Formula X spaceship racing, a detailed look at the spaceship industry, typical jobs of the time, household pets, the full human brain transplant, biographies of important people, the list goes on...
Includes many adverts of companies operating at the time throughout the book which adds colour to the whole book.
It is absolutely crammed with everything you could probably want to know about what life might be like as we approach the 24th century!
In brief, this book is a guidebook to the stories published from the Galactic Echo, giving you a basic background to the ideas in them, all based on the theme of the potential existence we may have in the 24th century.
Download: epub mobi (Kindle) pdf more Online Reader
rtf lrf pdb txt
Price: Free! USD
Add to Library
Create Widget
Tags: space adventure future adventure sport action space action scifi space action adventure
About Simon Coates

Reviews of Encyclopaedia of the Galactic Echo by Simon Coates

You have subscribed to Smashwords Alerts new release notifications for Simon Coates.