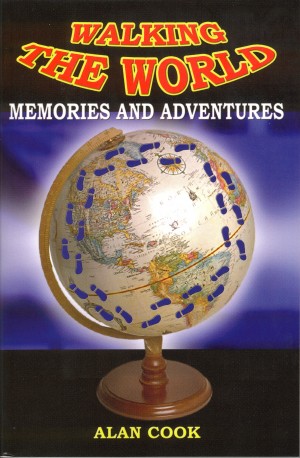 Walking the World: Memories and Adventures

By Alan Cook
Walking the World: Memories and Adventures elevates the act of walking from something we do every day without thinking about it to a means for putting more fun and excitement into our lives. And we can become healthier, at the same time. Whoever said, “No pain, no gain,” was out to lunch. More
“As Tolkien said, not all who wander are lost. Alan Cook is a walker who is always on the Road to Somewhere. (He) inspires us walkers to get moving on our own adventures. My chief reaction to the book is jealousy. I want to lace up my walking shoes and go exploring.”
—Wendy Bumgardner

Walking the World: Memories and Adventures elevates the act of walking from something we do every day without thinking about it to a means for putting more fun and excitement into our lives. And we can become healthier, at the same time. Whoever said, “No pain, no gain,” was out to lunch.
Whether the subject is learning to walk, walking safely, finding interesting places to walk throughout the world, climbing mountains or taking long walks, Alan Cook writes about it with wit and humor. The book gets exciting when he tells about getting lost in the wilderness of Colorado, and stories of his three long walks (the California coast, Los Angeles to Denver and the British End-to-End) and Ethan Loewenthal’s walk of the Appalachian Trail will make you want to get off your couch and follow their routes.

After spending more than a quarter of a century as a pioneer in the computer industry, Alan Cook is well into his second career as a writer.

TRUST ME IF YOU DARE

Charlie Ebersole is good at his job as a securities analyst for International Industries in Los Angeles in the year 1962, but he is also somewhat bored at being tied to a desk most of the time. He jumps at the chance to join the fraud section of II, and is immediately put on a case that will take him and another employee, Elizabeth Reid, to Buffalo, Fort Lauderdale, and possibly to Fidel Castro’s Cuba, although the Bay of Pigs fiasco is a recent memory, and relations between Cuba and the United States are not good. Charlie and Liz find out that uncovering a Ponzi scheme isn’t all just fun and games, but it can be dangerous too, especially when somebody is intent on them not discovering the truth. Before they are through they may wish they were back at their nice safe desks in Los Angeles.

The second Matthew and Mason adventure finds the boys going into a picture in their family room with the help of Amy, a girl in the picture. The dystopian world they find there with everyone's movements tracked, leads the three to attempt to bring personal freedom to the inhabitants at great risk to themselves.

In Alan's first children's book, Matthew and Mason are on vacation on the Greek island of Crete when they are whisked back in time 4,000 to the Minoan civilization at Knossos Palace. Captured, they escape death by becoming bull dancers on a team with other slaves. Beautifully illustrated by Janelle Carbajal.

Carol looks for a serial killer who likes to play games. As she attempts to figure out the game and its significance for the killer she realizes that events occurring when she was a college student but are lost to her because of her amnesia may be significant in tracking down the killer. Does the killer want something from her? If so, what? This is becoming too personal for comfort.

FOOL ME TWICE--CAROL GOLDEN NO. 6

Carol Golden is asked to help Peter Griffenham recover a chunk of money he's lost in a scam, but he doesn't want to go to the police, and by the time she gets involved the prime suspect, a dazzling redhead named Amy, has disappeared along with the money. Or has she? Perhaps that was only the first chapter, to be followed by a much larger scam. Can Carol help prevent chapter two?

GOOD TO THE LAST DEATH--CAROL GOLDEN NO. 5
When Carol Golden's husband, Rigo, disappears, she not only has to look for him, but elude the FBI at the same time, because there is evidence that she was involved in his disappearance. She doggedly follows a faint trail, keeping her location a secret from everybody except her friend, Jennifer, a spy-in-training, who takes time off from her top-secret job to help Carol.

HIT THAT BLOT--CAROL GOLDEN NO. 4
The fourth Carol Golden novel takes Carol into the exciting and dangerous world of tournament backgammon. She listens to a caller who calls himself Danny on the crisis hotline Carol volunteers for say he is afraid he'll be murdered. A backgammon player, herself, Carol, disobeys the hotline rules and sets out to find and help Danny. She needs all her experience with spies and detective work to survive this adventure.

DANGEROUS WIND--CAROL GOLDEN NO. 3
In the third Carol Golden novel, Carol is abducted by a shady government group and required to help find an old boyfriend of hers she doesn't remember (because of her amnesia) who is trying to bring about the "downfall of the western world." She will travel to all seven continents before she can figure out what's going on.

RELATIVELY DEAD--CAROL GOLDEN NO. 2
Having recovered her identity (lost in FORGET TO REMEMBER) if not her memory, Carol Golden seeks out some of her cousins in the second Carol Golden novel, only to find out they appear to be targeted for murder. While trying to figure out what's going on, Carol encounters the Grandparent Scam and a Ponzi Scheme, and finds out that she may be one of the targets of the murderer.

FORGET TO REMEMBER--CAROL GOLDEN NO. 1
Carol Golden isn't her real name. She doesn't remember her real name or anything that happened before she was found, naked and unconscious, in a Dumpster on the beautiful Palos Verdes Peninsula in Southern California. After some initial medical assistance, government at all levels declares her a non-person. She can't work because she doesn't have a Social Security number, which she can't get because she doesn't have a birth certificate. She can't even legally drive a car or fly on an airplane. This is the first Carol Golden novel.

Alan's Lillian Morgan mysteries, CATCH A FALLING KNIFE and THIRTEEN DIAMONDS, explore the secrets of retirement communities. They feature Lillian, a retired mathematics professor from North Carolina, who is smart, opinionated, and skeptical of authority. She loves to solve puzzles, even when they involve murder.

RUN INTO TROUBLE
Silver Quill Award from American Authors Association and named Best Pacific West Book by Reader Views. Drake and Melody are teamed up to run a race along the California Coast for a prize of a million dollars—in 1969 when a million is worth something. Neither knows the other is in the race before it starts. They once did undercover work together in England, but this information is supposed to be top secret. The nine other pairs of runners entered in the race are world-class
marathoners, including a winner of the Boston Marathon. If this competition isn’t enough, somebody tries to knock Drake out of the race before it begins. But Drake and Melody also receive threats calculated to keep them from dropping out. What’s going on? The stakes increase when startling events produce fatalities and impact the race, leading them to ask whether the Cold War with the USSR is about to heat up.

HONEYMOON FOR THREE--GARY BLANCHARD NO. 2
Silver Quill Award from American Authors Association and named Best Mountain West Book by Reader Views. Suspense takes a thrill ride. It is 1964, 10 years after Gary Blanchard’s high school adventures in The Hayloft. He and his love, Penny, are going on the trip of their lives, and, oh yes, they’re getting married along the way. What they don’t know is that they’re being stalked by Alfred, a high school classmate of Penny who has a bellybutton fetish. The suspense crackles amid some of the most scenic spots in the western United States, including Lake Tahoe, Reno, Crater Lake, Seattle, and in Glacier, Yellowstone, and Grand Teton National Parks, as well as the redwood trees and rocky cliffs of the northern California coast.

THE HAYLOFT--GARY BLANCHARD NO. 1
This 1950s mystery, takes us back to bobby sox, slow dancing, bomb shelters—and murder. Within two weeks after starting his senior year of high school in the 1950s, Gary Blanchard finds himself kicked out of one school and attending another—the school where his cousin, Ralph, mysteriously died six months before. Ralph’s death was labeled an accident, but when Gary talks to people about it, he gets suspicious. Did Ralph fall from the auditorium balcony, or was he pushed? Had he found a diamond necklace, talked about by cousins newly arrived from England, that was supposedly stolen from Dutch royalty by a common ancestor and lost for generations? What about the principal with an abnormal liking for boys? And are Ralph’s ex-girlfriends telling everything they know?

HOTLINE TO MURDER, his California mystery, takes place at a listening hotline in beautiful Bonita Beach, California. Tony Schmidt and Shahla Lawton don't know what they're getting into when they sign up as volunteer listeners. But when Shahla's best friend is murdered, it's too late for them to back out. They suspect that one of the hotline's inappropriate callers may be the murderer, and they know more about them than the police do.

ACES AND KNAVES is a California mystery for gamblers and baseball card collectors. Karl Patterson deals in baseball cards and may be a compulsive gambler, so he's surprised when his father, Richard, CEO of a software company, engages him to check up on the activities of his second in command. It doesn't hurt that Richard assigns his executive assistant, Arrow, an exotic and ambitious young woman, to help Karl, but none of them expects to get involved in murder.

FREEDOM'S LIGHT contains quotations from 38 of history's champions of freedom, from Aristotle to Zlata Filipovic, from George Washington to Martin Luther King, Jr. Included are Jefferson, Adams, Franklin, Anne Frank and many more.

Alan splits his time between writing and walking, another passion. His inspirational book,
WALKING THE WORLD: MEMORIES AND ADVENTURES, has information and adventure in equal parts. It has been named one of the Top 10 Walking Memoirs and Tales of Long Walks by the walking website, Walking.About.Com.

Alan lives with his wife, Bonny, on a hill in Southern California.

You have subscribed to alerts for Alan Cook.

You have been added to Alan Cook's favorite list.

You can also sign-up to receive email notifications whenever Alan Cook releases a new book.