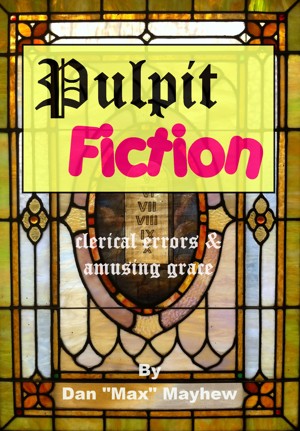 Pulpit Fiction is compilation of stories told by pastors around the U.S. The names have been changed for reasons that should be obvious.

Dan Mayhew is a former high school teacher. He holds a degree in communication and theater from Portland State University, and a MAT from Lewis and Clark College. After several years as a teacher, he served as associate pastor of a congregation of about 1200 in Portland, Oregon.

In 1990, Dan began a community of home-based churches called The Summit Fellowships (www.summithome.org) where he serves as a church planter, teacher and encourager. In addition, he assists International Renewal Ministries by facilitating Pastor’s Prayer Summits throughout the Northwest and across the country in an effort to bring pastors of all denominations and traditions together for prayer.

Dan has facilitated workshops related to house churches, and is requested as a speaker. He encourages Christians to reevaluate traditional methodology and structures in response to what he sees as the changing world of the American church. Recently, he assumed pastoral duties at a small local congregation, but his heart is still with the small, simple and committed churches that meet outside more formal religious structures.

Dan is also a writer and has been a regular humor columnist in several newspapers. His columns also appear in the Humor for the Heart books, Howard Publishers.

You have subscribed to alerts for Dan Mayhew.

You have been added to Dan Mayhew's favorite list.

You can also sign-up to receive email notifications whenever Dan Mayhew releases a new book.