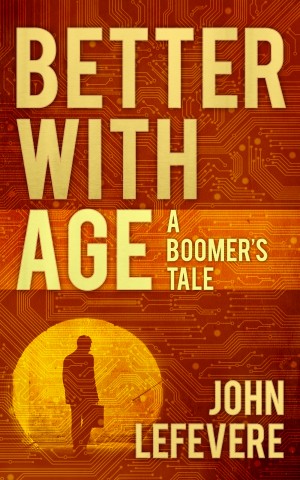 Better With Age: A Boomer's Tale

Determined to save his job, Barnes learns to creatively use digital technology to start turning the tables on the incoming executives who have targeted him for elimination. Things start turning in Peter’s favor as one executive appears to be involved in a sexting scandal and another is secretly being enticed to leave his position for a startup. Then a deeper scandal surfaces and a shocking death throws CAT into turmoil. In order to keep his job, Peter must maneuver through the turmoil while proving his theory that successful executives get better with age.
Available ebook formats: epub mobi pdf rtf lrf pdb txt html
First 10% Sample: epub mobi (Kindle) lrf more Online Reader
pdb
Price: $2.99 USD
Buy Add to Library Give as a Gift
How gifting works
Create Widget
Tags: baby boomer money laundering smartphones boomer mystery violent death rif reduction in force computer worries story boomer executives office intrigue treachery
About John Lefevere

Do you find unsolved historical mysteries intriguing? Mysteries like who really ordered Booth to assassinate Lincoln? The murder of the Hermit of Maple Island? Who stole the Irish Crown Jewels? Where did the missing sailors of the Lost Channel end up? And how did a stolen War of 1812 British payroll end up in the hands of bootleggers? Author John Lefevere finds these unsolved enigmas fascinating and has crafted a trilogy in his “A 1000 Islands Novel” series in which his protagonists try to solve them. In his ebook novels The Scimitar And The Snail; Jewels And Ghouls; and River Rogues, Steve Stone and Jill Matson, who live in the Thousand Islands, New York, follow theories and investigate leads to bring the truth to light, while also fending off terrorists, scamsters and just plain nasty people.

Author John Lefevere is a retired corporate attorney whose life experiences include an appearance on The Ed Sullivan Show, playing golf next to the Giza Pyramids in Cairo, Egypt and recently appearing in a TV commercial. He knows from experience that there is not much difference between creating the suspension of disbelief in fiction and “shading” the facts to make them more palatable to the reader in law practice. In either case, he finds the act of writing to be fun and challenging.

When not traveling, John and his wife divide their time between homes in Virginia and the Thousand Islands, New York.

Reviews of Better With Age: A Boomer's Tale by John Lefevere

You have subscribed to alerts for John Lefevere.

You have been added to John Lefevere's favorite list.

You can also sign-up to receive email notifications whenever John Lefevere releases a new book.