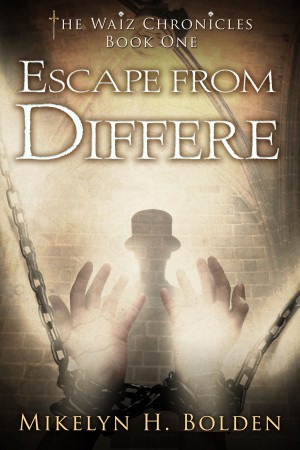 Escape From Differe: The Waiz Chronicles: Book One

By Mikelyn H. Bolden
Joel hears voices in his head, but a desperate escape prompts an unimagined adventure that awakens a voice in his heart. Along the way, he picks up three companions – a man who speaks in riddles, a hotheaded brunette, and her sickly brother. As Joel searches for freedom from his past, the four characters are pushed and pulled by forces they only vaguely understand and certainly cannot see. More
Joel’s schoolmates call him “Crazy Moonie.”

He hears voices in his head. Hoping for a cure, his father enrolls him in the Temple of Differe School. Joel finds the cure is worse than the disease when the headmaster imprisons him in the dungeon-like Moonstruck, where he and another student must take their lessons alone.

Joel believes escape is his only chance. With the help of an insider, he journeys to a place he has been told does not exist. Along the way, he picks up three companions—a mysterious man, a hotheaded young woman, and her sickly brother.

The four arrive in Waiz, where inhabitants revere something they call “The Majestic.” Upon further investigation, Joel finds their object of worship is no more than an old black rock. Or is it?

The longer the four stay in Waiz, the more the animosity between Old Waiz and New Waiz threatens to boil over into war. Then someone murders an Old Waiz leader and Joel finds himself the accused.

Meanwhile, the headmaster is desperate to get Joel back and uses his past love as bait. Danger follows as he tries to find if his true freedom lies in a city on the brink of war, a school that indoctrinates, or a king no one can see.
Available ebook formats: epub
Price: $7.99 USD
Buy Add to Library Give as a Gift
How gifting works
Create Widget
Tags: adventure inspiration healing freedom allegory voices in your head triangle love freedom from bondage fighting against lies listening to lies
About Mikelyn H. Bolden

Mikelyn Bolden grew up in southeast Alabama on a seventeen-acre piece of land with no cable television. This means she knows how to kill snakes, fry okra and eat boiled peanuts. She also says “yes ma’am” a lot and has a standing date with college football on Saturdays in the fall.

Mikelyn comes from a long line of devoted storytellers and began writing short allegorical tales in elementary school. She became an obsessive journalist about this time and was frequently known for getting lost in her world of imaginative stories (Ahem, still does).

Throughout high school and college she used her writing and leadership skills for various inner city humanitarian projects around the world. The perspective gained from these ventures led her to choose a career in speech-language pathology. Though she is now writing fulltime, she still enjoys “playing” with little people and empowering adults through this field.

Escape from Differe is her first novel and was birthed mostly out of her own personal story, as she will readily admit that she hears voices in her head and often talks to herself just like her main character in The Waiz Chronicles.

Depending on the day, Mikelyn can be found with her husband in Dothan, Alabama, on the Auburn University campus, or traveling the globe in search of inspiration for her next story. She is expecting her first child early next year.

Reviews of Escape From Differe: The Waiz Chronicles: Book One by Mikelyn H. Bolden

You have subscribed to alerts for Mikelyn H. Bolden.

You have been added to Mikelyn H. Bolden's favorite list.

You can also sign-up to receive email notifications whenever Mikelyn H. Bolden releases a new book.