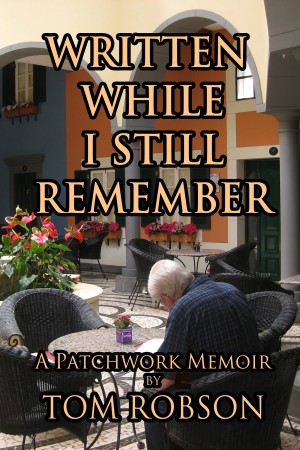 Written While I Still Remember

By Tom Robson
"Written While I Still Remember" is a history of the times, as well as a personal portrait composed during the last thirty years. This is a collection of sometimes true stories and poems that can be enjoyed by anyone. More
Tom Robson began to write creatively in his forties after he moved to Nova Scotia. Originally, his work was either with or for his elementary school students, or purely for the satisfaction that results from creating. Though his students were primarily the target audience for much of his fiction, poetry and plays, he also compiled reminiscences of his ancestry, his early life in England and, later, his life after becoming an immigrant in Canada.

"Written While I Still Remember" is a history of the times, as well as a personal portrait composed during the last thirty years. The collection of sometimes true stories and poems coincided with a distancing from his children and grandchildren, most of whom had little perception of the people, places and situations that had shaped him. This book is meant to right that wrong—to give life to their shadowy predecessor. Too often, individuals wait until it is too late to discover the facts behind the elders in their lives. Of course, facts can be embellished by the elderly’s tale-telling.

Tom hopes his collection proves that tales from an ordinary life can be interesting to readers outside the family.

Born a proud Yorkshireman before World War Two, Tom Robson grew up amid the history, traditions and beauty of the New Forest in southern England, returning there to begin a forty-year career in education.

He and his family immigrated to Canada in 1971. From Montreal, Tom moved east to Nova Scotia while his first family went west. It was then he began writing, with the encouragement of his second wife, Barb, who has put up with his indulgence for almost forty years.

Over the years, he has amassed an eclectic collection of plays, poems, stories, fact-based fiction and one award-winning novel for mid-teens. Until recently, publication has avoided him. This book is preceded by his contribution to the anthology, "Out of the Mist, 22 Atlantic Canadian Ghost Stories."

Tom no longer believes that self-publication is the last refuge of the rejected writer. He does believe that publishing companies’ autocratic editors are a vanishing breed and that the business of life is the acquisition of memories.

“It's good to have these stories written and published for when the memory fades,” Tom says.

You have subscribed to alerts for Tom Robson.

You have been added to Tom Robson's favorite list.

You can also sign-up to receive email notifications whenever Tom Robson releases a new book.