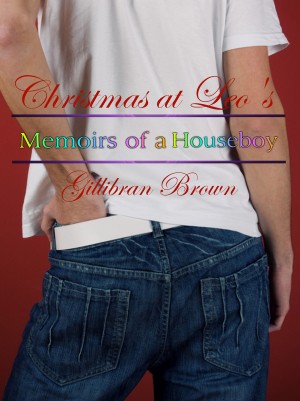 Christmas At Leo's - Memoirs Of A Houseboy

I wasn’t looking forward to spending Christmas as part of a house party at Leo’s place to begin with. The booze ban by my boyfriends had taken the lustre right off the party season for me.

What’s Christmas without a flagon of ale or a classy glass of fancy fizz? Boring!

A visit to my mother, on the day before Christmas Eve, did nothing to lift my mood. It triggered a welter of memories and emotions that made Christmas seem even less appealing.

Stuff the season of goodwill.

I just wanted to be left alone to brood. I wasn’t given the choice. I was spending Christmas at Leo’s whether I liked it or not. It proved to be eventful in its own way. Details within.

Read this book the day I bought it but I don't know why I waited so much to write a review. After reading it again today my feelings are the same. I LOVE your books and can't get enough of you , please write more :)

I loved every moment of this. Looking forward to the next one.

I have read ALL of Gillibran's books and this one is every bit as good as all the others. He made me laugh, cry, cringe (with fear for his arse) and I felt connected to him from across the water.

He's got a real talent for writing. I like that I can hear his accent straight through his words, I feel like he's talking to me and I feel like I've got to know him over his biography series.

I hope you'll keep writing Gilli. What a fascinating look into a life! I love every word of your books. Thank-you!

I downloaded this at about midday and have just finished it - it's now 10PM. I loved it but it was all over too soon. I adore Gillibran but I wish that he would open up to Shane and Dick as I think that many of his problems would soon disappear. As usual he made me laugh and he made me cry. There are so many levels to him and we, the readers, get a peek at all of them.
In Christmas at Leo's we see a lot more of Gilli's background and his life with his mother and Frank. We also get to see Gilli's coming out. I really was in tears as I watch him. I know that he can be a pain and he can be self-centred but he had to overcome so much.
I loved seeing him with Pat and with Eileen. I also loved the prank that he pulled while at Leo's - pure Gilli.
I hope that the next book in the series is available soon because I want to read more about Gillibran and his daddies.

(reviewed 2 days after purchase)
Beth Wray reviewed on Nov. 18, 2014
(no rating)
Oh wow, and there I see my name, I thought my screen name would be there. Obviously I am not a regular reviewer, gonna have to figure that one out.

Gillibran Brown does it again!! I am a huge fan! This book was especially good because we get some background. I read the other reviews here and I agree about gilli deserving the same level of love and respect from Dick and Shane that they have for each other. They dismiss his sometimes very legitimate feelings so quickly. It's no wonder he needs a great deal of reassurance, many people have treated him so badly in his life. Protect is what Shane does though, it's a part of the relationship that gilli needs and I gotta say Shane makes me hot too. This was another wonderful book in the series, Gilli makes a new friend as kindhearted as he is and I loved his kitchen time with Leo. Can't wait for more as it's it's seeming inevitable that Gilli is going to have to confront some issues, I look forward to reading about his journey.

What can I say, except another amazing addition to the series. Mr. Brown is a great writer an understatement I know but I'm no good with words. I just know that his writing, his story, his life has drawn me in so much I've become emotionally invested in his work. And I agree with tcom8541, when Dick said what he did I had an "Oh Hell No!" moment. It really was a painful read, but Gillibran really is so loveable you stay the course with him, and I can not wait for the next book.

I thank Gilli for continuing this autobiog. I've enjoyed the diary aspects as well as the extensive stories of significant events. I've laughed out loud more than once.

However, reading this installment makes my heart hurt. I'm American, so Dick's remark in chapter 14 (no spoilers, you'll know the one I mean when you read the book) was horrifying. Gilli's partners seem so dismissive of his right to be a person different from them. They may do well in the protective part, but it is described as a duty, not out of love and cherishing. But they don't seem to have any concept of what makes self esteem in others, and that the world looks different to people of different backgrounds. They really don't seem to know him or want to discover him as a lover would, they seem to just intimidate him and IMHO take advantage of him. I don't mean the bdsm or ménage aspects, but really "seeing" him as a lover would. True he is free to leave, but I sense he'll continue to stay the course, hoping for the "elderly caravanners" to love him one day as he does them. In the first chapter (out for a long time so not a spoiler), where Gilli expresses a fleeting desire for a boyfriend his age, to hold hands and dance with), makes me wish I could package up a box of self respect to send him. And maybe a therapist or couples counselor and a boyfriend who would love and cherish him. I hope the daddies read all his writings one day, and at least acknowledge the guy can write extremely well. I wish there was someone to properly value him. And that he would better value himself. No wonder this installment took so long to finish, it's full of such pain. Of course this book is six years ago, I hope things have improved by now, and hope he will eventually write "Revelations". When Gilli's mom died, I hope the daddies went to the funeral with him, to support him instead of just throwing money into flowers.

Maybe one day Gilli will share the story of how he came to join the ménage. The Christmas at Leo's seems to be laying the groundwork for that story by showing how he became the boy who showed up at the quasi-mansion in 2004. So far it seems the couple (and face it, this is not a trio but a couple plus one) do not really know all of that story, which is the ultimate source of Gilli's highly charged emotional state at Christmas. They care enough (for their own comfort) to ask him what's wrong, but again IMHO, why should he tell them? They would marginalize and dismiss his life experience as they did in an earlier installment when Gilli tried to explain why going to his pal's wedding as a teetotaler would be so difficult. And it all relates back to Dick's horrifying (to me--there's a reason we had a revolution) and ugly comments to Gilli in chapter 14.

The series has been witty, sometimes hilarious, sexy, painfully poignant, and above all, courageous. I highly recommend it.

(reviewed 2 days after purchase)
Aoleary0482 reviewed on Nov. 15, 2014
(no rating)
So excited to read this!! Please, if anyone knows how to send fan emails to Gillibran, can you let me know? I'd love to contact him. He says he receives fan emails but I can't found out how :( my email is funtimes0414@yahoo.com Thanks! Going to start reading right now. I just know it will be brilliant!