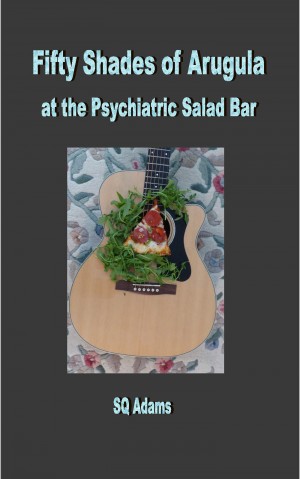 Fifty Shades of Arugula at the Psychiatric Salad Bar

By Robert C. Hancock
This book is a diverse collection of short satirical pieces. There are rants against the Social Security Admin ; the customer service of Comcast, the perks of being a monopoly and a story about the shared horror of a trip to the RMV. Stories of life experiences include my first visit to an ashram: being one of the last people on earth to get a cell phone; and a trip to the Nervous Hospital. More
As a follow up, but not quite a sequel, to my book, The Psychiatric Salad Bar: Adventures in Autism and alternative Realities, I had planned to offer up travel tips down the road of raising an autistic child, and to a degree, I have, but I decided to branch out and cover the plethora of roads leading to and from other crazy towns….because, well, there are so many out there.
What we’re talking about here is being driven to the edge and left there teetering with your hair on fire. Anyone who has had a bad customer experience with the monolith Comcast knows what I am talking about. That appears in the piece entitled, “Comcast…Love it or List it.”
“It’s enough to give you gas,” is a piece about the year and a half journey to convert from oil to gas heating. The stories of consumers getting screwed are legion. But it’s more than that. Saving the life of a baby robin, left behind, by feeding it baloney and cheese sandwiches…or the piece about the post retirement hobbies of learning the guitar and offering up an homage to Jimi Hendrix not just by eating a six cheese pizza off the strings, but a fifty shades of arugula salad as well.
The book is filled with a diverse collection of rants, like “Entropy Now” in which we learn that smart appliances aren’t really all that bright especially when a nearby lightning strike can convince your refrigerator that it is a microwave oven; cooks all the food and invites your Facebook friends over for dinner.
There are observations and flights of fancy, conjecture about what could have been. If only there were a different mix of animals at the “First Parish’s First Annual Blessing of the Pets” aka, “The Running of the Hamsters,” it could have gone viral. There’s something for everyone. Enjoy.

Robert Hancock and his wife Marianne, until late, lived in a very old, very large house in southeastern Massachusetts.This provided him with an ample “To do list,” and it is with personal pride that he did not let this three hundred year old house fall down during his watch.
Though it is still officially winter, outdoor tennis is "game on". As a senior citizen, he is now dedicated to doubles tennis where he has staked out a small area of the court, formerly dubbed his: “Area of Responsibility” from which he has vowed never to stray. That pressure proved to be too great and he has since downgraded that area to the “Cone of Concern”. He's concerned, but not actually responsible. Once he gets accustomed to playing in a full hazmat suit, he could be a force to be dealt with.

You have subscribed to alerts for Robert C. Hancock.

You have been added to Robert C. Hancock's favorite list.

You can also sign-up to receive email notifications whenever Robert C. Hancock releases a new book.