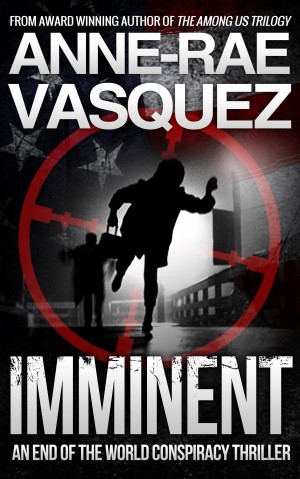 By Anne-Rae Vasquez
Rated 5.00/5 based on 1 review
The American government has ordered all citizens to implant microchips under the guise of an emergency program to coordinate the distribution of much needed food and supplies after devestating natural disasters hit the entire nation. Little do they know what the government’s real plans are.The end of the world is at hand unless Jakob Karim and resisters succeed in exposing the lies. More
Outcasts from different parts of society, ethnicity, and beliefs are being drawn together. Coincidence?

It gets more difficult for those with extra gifts such as Intelligence, psychic abilities, or supernatural powers fit into society. Living their safe lives, they cannot ignore what is happening around them. They sense something odd in the world. Sometimes they see things… people… that no one else sees. Their friends and family can’t understand them. They can’t understand themselves.

Meanwhile in one-third world country the opposite is happening. Deserts turn into farmlands, abundance of clean water spring out of nowhere. Once impoverished nations, now rich and powerful nations. Their sudden richness in resources now makes them a super power. The richest of the rich want a piece of the wealth and make this third world country their home.

In the USA, a new president is elected. A tough republican who vows to bring America back to the status of 1st world super power. He promises to bring tough measures for a full recovery of the economy and their super powers. These include stripping down of all citizens’ rights and privacy. All people are asked to be numbered in order to coordinate food and services to the people. Those refusing to be numbered are sought out by the government, captured, brainwashed and/or arrested. Is this the end of the world? Are the predictions in the Book of Revelations coming true?
Available ebook formats: epub mobi pdf rtf lrf pdb txt html
First 20% Sample: epub mobi (Kindle) lrf more Online Reader
pdb
Price: $2.99 USD
Buy Add to Library Give as a Gift
How gifting works
Create Widget
Tags: fantasy apocalypse supernatural end of the world political thriller christian fantasy conspiracy thriller microchip political conspiracies thriller action and adventure
About Anne-Rae Vasquez

Anne-Rae Vasquez latest novel Reveal book 3 of the Among Us Trilogy was released in 2019. Her previous novels RESIST and Doubt, Books 1 and 2 of the Among Us Trilogy are winners of the Readers' Favorite Book Awards. The Among Us Trilogy questions what is beyond the reality of this world and ties in different supernatural religious beliefs of God, Heaven, Purgatory and Hell, angels and demons apocalypse, spirituality and fantasy by mixing themes from shows like Fringe and Supernatural to create an end of the world religious paranormal mystery thriller.

Her previous novel Almost a Turkish Soap Opera was adapted into a screenplay and later produced into an award winning feature film and web series and was her directorial debut. Her other works include: Gathering Dust - a collection of poems, Salha's Secrets to Middle Eastern Cooking Cookbook and Teach Yourself Great Web Design in a Week, published by Sams.net (a division of Macmillan Publishing).

In her parallel life, she hosts/produces Fiction Frenzy TV, a VLog channel featuring indie artists, authors, filmmakers and musicians. In addition to this, she freelances as a journalist for Blasting News (and previously Digital Journal) and manages a production department.

Almost a Turkish Soap Opera is an award winning feature film, and web series adapted from the novel that captures the turmoil of two young modern Turkish men trying to make a home in the West but finding their lives have turned into a Turkish soap opera. Almost a Turkish Soap Opera, an independent film by Sababa Emporium Productions and AR Films screened and won awards at film festivals and is available to view on Amazon Prime Video. The film reflects on how Turkish soap operas have become very popular in the Middle East and now in Europe and how the West has influenced the Middle Eastern culture. For details go to www.almostaturkishsoapopera.com

As an avid follower of the Truth Seekers Series this spin off answered most of the questions a true reader will think of.

This book shows what goes inside the head and emotion of those "ordinary people" outside the story. The viewpoint of those people excluded from the main storyline. The author shows the drama and the sufferings of those unheard of people. Come to think of it, in a reality based situation or when something happens in our world, those people are us all. So this book balances out the worlds view on what is happening in the series. A well thought of book! I can't believe myself that I am curious to what will happen in the series and how the persons in this book connects with the main storyline. I wonder what that man in the gray suit really is....

Kudos once again to Anne-Rae Vasquez. Now I am more curious and excited for the last book and I have to blame the author for that!

You have subscribed to alerts for Anne-Rae Vasquez.

You have been added to Anne-Rae Vasquez's favorite list.

You can also sign-up to receive email notifications whenever Anne-Rae Vasquez releases a new book.