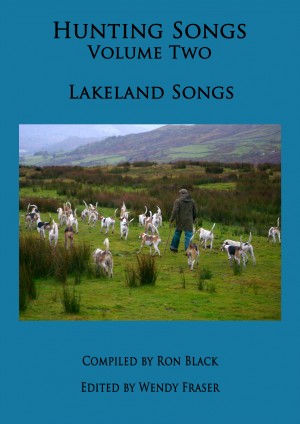 By Gone2Ground Books
143 pages, 51 traditional songs interspersed with text and amusing anecdotes. Most of the songs in this book have been passed down from generation to generation, each an important part of Lakeland (Cumbria, UK) oral history. Hence there is no conventional spelling, punctuation or grammar for these written versions, many containing words of dialect. More
Neil Sainsbury, Hon Secretary, Central Committee of Fell Packs writes: Ron has recently followed up his successful book produced last year of Lakeland Hunting Songs with Hunting Songs Volume 2 : Lakeland Songs which gives us more of the same. It has always been a great tradition up here in the fells for supporters of the Fell Packs to pen vocal tributes to memorable hunts, famous huntsmen and even hounds from both past & present. Some years ago I myself compiled a History of the Coniston Foxhounds, based on contemporary hunting reports in the local and national press of the time and realised just how important a sing song has been to the Dalesmen of the Lakes for hundreds of years. I found many amazingly descriptive reports of hunt suppers, Merry Neets, Harvels of the past.

Times have changed and the evenings which have been a regular part of fell hunting for centuries have greatly diminished and the numbers of hunters prepared to perform has also waned. As such, many of the traditional songs and ditties are in danger of being lost forever. As these are such a vital part of our heritage, this would be disastrous and for the sake of our history it is so important that as many of them as possible are saved for posterity.

One of the things I like with Volume 2, is the way that Ron has interspersed a number of lovely little hunting stories and anecdotes. Some are historical whilst others are the result of Ron’s own experiences and are written in such a way as any reader, especially those of us who have grown up with the fell packs, can recognise as fairly typical of our own experiences from our youth.

This is a super little book, well researched, nicely presented and very worthy of joining its stable mates on your hunting bookshelf.

6 September 2017: It is with tremendous sadness that I have to give the news that dear Ron passed away peacefully last night. Those of you who have followed him on his FB page will know that he was diagnosed with cancer earlier this year. Our thoughts and condolences go out to his family and friends. Ron&#39;s website &#39;Lakeland Hunting Memories&#39; will remain active in perpetuity as his legacy to the sporting traditions and social history of the Lake District.

Gone2Ground Books was created by Ron Black and Wendy Fraser in 2011 after they had successfully published a few books based on Ron&#39;s personal experiences as a boy brought up in Ambleside, in the Lakeland District of Cumbria (UK). Ron&#39;s books describing the social life and history of the region were produced from the pages of his popular website, Lakeland Hunting Memories, created by Wendy in 2008.

Ron writes: &quot;Recently I was told that 95% of Lakeland was unexplored in an archaeological sense. With the abolition of Fox Hunting in 2005 there was a slight chance that places and structures associated with fox hunting would in the fullness of time join them, lost in time and memory.

&quot;It was with this in mind that I began to compile material for my website. It is not my intention for it to glorify or be used as propaganda for or against hunting, but simply to record associations with a &#39;sport&#39; traditional to Lakeland for over 300 years.

&quot;I am a native Lakelander with roots going back to 1700, the 4th generation to follow hounds, with ancestors who stood on the cold tops at dawn, moved the heavy Lakeland stone to free trapped terriers and also &#39;carried the horn&#39; on occasions. I hope this site is of interest to you. Hunting will not come back in the foreseeable future, perhaps not at all, but for three hundred years hunting and the church were the central thread to many communities. This is a part of the story.&quot;

You have subscribed to alerts for Gone2Ground Books.

You have been added to Gone2Ground Books's favorite list.

You can also sign-up to receive email notifications whenever Gone2Ground Books releases a new book.