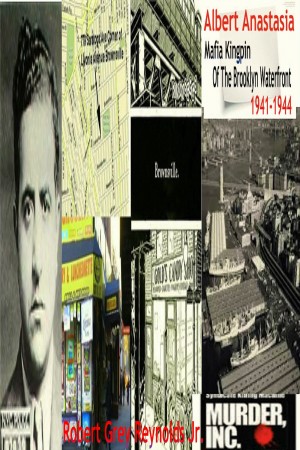 By Robert Grey Reynolds, Jr
Albert Anastasia was the quintessential Mafia boss, who became the head of the Gambino family, from 1951-1957. The events of his early rise to power include a stint as a master sergeant in the U.S. Army during World War II. I have researched the events of his early criminal activity, i.e. his years as an integral figure in the Murder-for-Money gang that was led by garment racketeer Louis Lepke. More
Albert Anastasia is perhaps best known for having been murdered while he was sitting in a barber's chair. Many are unaware of his early years as a Mafia operative on the Brooklyn waterfront. In the early 1940s he established himself as an extortionist who seized $35,000-$40,000 at a time from longshoremen. He was also ruthless in getting rid of his opposition, individuals like Anthony Romeo, who I have profiled in my e-book. Anastasia once protected the lives of the Mangano brothers, who came to the U.S. from Palermo, Italy. Eventually Philip and Thomas Mangano were eliminated by Albert Anastasia on his rise to the top of the Gambino Crime Family of New York. I have used ancestral records and newspaper articles to depict Anastasia's early criminal career, including photos of his family, details of his crimes and the people he associated with in what came to be known as Murder Incorporated.