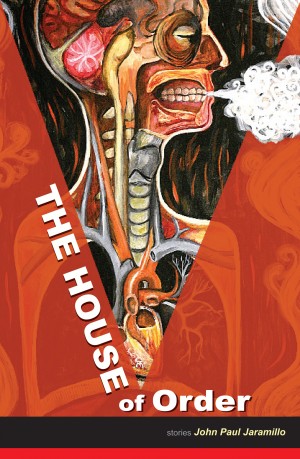 The House of Order

“The House of Order is an enticing read that shouldn’t be overlooked for those looking for a down to earth short fiction collection.” –Midwest Book Review

“Jaramillo is writing about working in Southern Colorado farm fields, driving and drinking beer and smoking pot; visiting family members in the state penitentiary; about tattooed pregnant girls, dirty kids in laundromats and their desperate mothers-and the pain-filled list goes on, back through several decades. What saves these stories is the grace in which they are written.” –Mary Jean Porter, Chieftain.com

“Each story in Jaramillo’s collection stands alone, but together they make a powerful combination, with vivid descriptions, realistic characters, and strong emotions that will make readers cry, laugh, cringe and hope.” –Latina Book Club

“If you like writing that is unpredictable and makes you think, this collection is for you. These short stories have characters with complex, sometimes depressing, but always fascinating lives.” –LatinoStories.com 2013 Top Ten “New” Latino Authors to Watch (and Read)

“Raw and highly emotional at times, Jaramillo’s stories give a realistic look in to the lives of his characters as he presents short vignettes that hint at a deeper family saga. His style is easy to read and his concise wording retains a surprising amount of detail. All in all, The House of Order is a compelling set of stories and should Jaramillo continue to present such fantastic storytelling, there is no doubt he will gain many new readers.” –San Francisco Book Review

“These stories find John Paul Jaramillo hitting his stride as an acute observer and chronicler of hard and valuable lives. The writing conveys great warmth and understanding. This is a career to watch.” –Tracy Daugherty, author of One Day the Wind Changed

“Besides the razor-sharp writing which brings even those characters whom we meet only briefly vividly and memorably to life, what compelled me was my affection and concern for the narrator, who sets out to record the stories of his elders, and through them, to understand the forces that have shaped and directed his own experience. The result is a collection of stories that holds together like a shattered vessel, whose fragments have been gathered and expertly glued. Manito himself, battered by drink and drugs and the abuses of combat, barely holds together sometimes — but even at his lowest and darkest, the impulse remains in him to comfort and assist. It’s this that saves him, and that sets this collection apart — and above, in my opinion — less forgiving depictions of people struggling to take control of their lives.” –Jennifer Cornell, author of Departures

Anna Faktorovich is the Director and Founder of the Anaphora Literary Press. Faktorovich has over three years of full-time college English teaching experience. She has a Ph.D. in English Literature and Criticism and an M.A. in Comparative Literature. Her Rebellion as Genre in the Novels of Scott, Dickens and Stevenson critical book has been published with McFarland in February, 2013. Her new book, The Formulas of Popular Fiction: Elements of Fantasy, Science Fiction, Romance, Religious and Mystery Novels, is completed and will be released with McFarland in October, 2014. Two additional critical books are forthcoming with Anaphora: Gender Bias in Mystery and Romance Novel Publishing: Mimicking Masculinity and Femininity and Wendell Berry’s New Agrarianism and Beyond; for the latter she received a Kentucky Historical Society fellowship. She published two poetry collections Improvisational Arguments (Fomite Press, 2011) and Battle for Athens (Anaphora, 2012). She published two fantasy novellas with Grim’s Labyrinth Publishing: The Great Love of Queen Margaret, the Vampire and The Campaigns against the Olden.

You have subscribed to alerts for Anna Faktorovich.

You have been added to Anna Faktorovich's favorite list.

You can also sign-up to receive email notifications whenever Anna Faktorovich releases a new book.