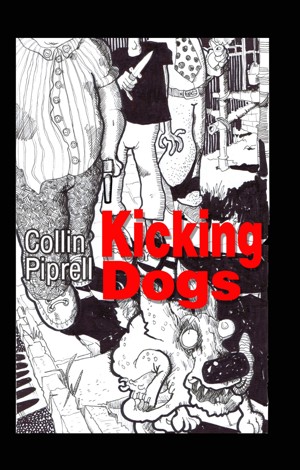 Kicking Dogs, surviving Bangkok's boom - Thai style. A comic thriller set in boom-time Bangkok. A fast and funny novel from the author of Bangkok Knights and Yawn (A Thriller).

Greed and corruption grip the city, and - although he thinks he's adjusting nicely to the Thai way - Jack Shackaway, freelance journalist and author of such literary masterpieces as "A Dick for Dorothy", is succumbing to a bad case of culture shock. Jack has no idea who's trying to kill him, but given his talent for annoying the wrong people, it could be just about anybody. Every time he turns around he gets into hassles with the locals. Not only that, if he isn't careful he's going to wind up married to Mu, which might be better than being dead, but not necessarily a lot better.

Shortly after somebody takes potshots at Jack in a taxi, Mu's sister Bia is kidnapped. Then Jack gets snatched, and is introduced to local godfather Mr. Hung Fat, often referred to as "Fat Fat," but not to his face. Fat Fat's men have mistaken Bia for Mu, and their boss will do unpleasant things to her unless Jack provides compensatory services for Fat Fat's public loss of face at the hands of intrepid investigative journalist "Izzy Scoop." But this is a double case of mistaken identity - Fat Fat believes that Jack is the man behind Izzy. If Fat Fat finds out that he isn't, then Jack's a dead man for sure.
Available ebook formats: epub mobi pdf lrf pdb html
First 20% Sample: epub mobi (Kindle) lrf more Online Reader
pdb
Price: $4.99 USD
Buy Add to Library Give as a Gift
How gifting works
Create Widget
Tags: thriller mystery humor bangkok freelance journalist colin cotterill collin piprell
About Collin Piprell

Collin Piprell is a Canadian writer and editor based in Bangkok. He has also lived in England, where he did graduate work at Oxford, and in Kuwait, where he learned to sail, water-ski, and make a credible red wine in plastic garbage bins. Before and after the Oxford and Kuwait years Collin was, among other things, a driller and stope leader on mining and tunneling jobs in Ontario and Quebec, a freelance feature writer and editor, and editorial director of a small publishing company with offices in Bangkok, Phuket, Koh Samui, Bali At the end of 2008 he resigned to devote himself to writing. Over the past years he has produced many articles on a wide variety of topics. He is also the author of four novels, a collection of occasional pieces, a diving guide to Thailand, another book on diving, and a book on Thailand's coral reefs. He has also co-authored a book on Thailand's national parks. He is currently at work on the second novel of a futuristic trilogy. MOM, the first book in the series, is complete.

You have subscribed to alerts for Collin Piprell.

You have been added to Collin Piprell's favorite list.

You can also sign-up to receive email notifications whenever Collin Piprell releases a new book.