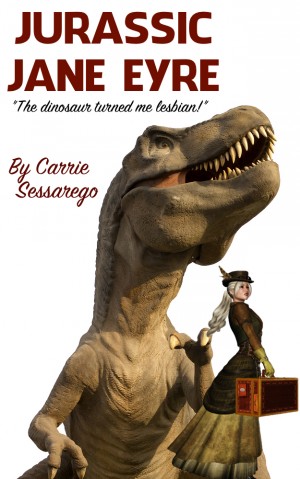 Reviews of Jurassic Jane Eyre: The Dinosaur Turned Me Lesbian by Carrie Sessarego

I did enjoy this, but please do not take this story seriously, it's solely for shits and giggles. Preposterous, but fun. THREE "I liked it" STARS.

(review of free book)
Robert Zimmermann reviewed on May 24, 2015

Yes, I actually read one of those dinosaur, semi-erotic stories. Finally. I’ve tried a few in the past to see why they were becoming a thing, but I don’t think I finished any. Jurassic Jane Eyre isn’t one I DNF’d. I actually enjoyed what I read.

I think the main reason I enjoyed this story was because it didn’t take itself seriously. The author wrote a pretty good story, while letting the character narrate the ridiculous situation as if she were just as baffled by what she was getting into.

I also thought that it touched on sexuality in a good way, even if it was brief (it was a short story after all. Can’t elaborate too much in a few thousand words.) It was just enough to hint that the stories this was parodying might not be portraying homosexuality (at least most of them deal with non-straight relations) in a more truthful light, despite the fact that it’s also a dino-human relationship.

I’d check out other stories from this author for sure. For a few minute escape, and some good laughs, it was definitely worth checking out. I also thought the addition of the “Science Disclaimer”, which pointed out all the inaccuracies in the story, added even more to the experience.

You have subscribed to Smashwords Alerts new release notifications for Carrie Sessarego.

You have been added to Carrie Sessarego's favorite list.

You can also sign-up to receive email notifications whenever Carrie Sessarego releases a new book.