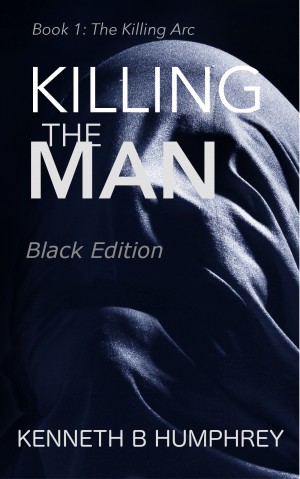 By Kenneth B Humphrey
Adult

If bad decisions lead to great stories, then Rick Killing has a whopper. Ripped from the headlines, Killing The Man tells the story of a race war in small town America. It's planned, it's purposeful and it centers on a main character who has no idea why. More
Murder. Wit. Heart. Surprisingly mixed in a fast-paced story of one man's race.
It starts with the violent murders of three white upstanding professionals; three crimes stark in their symbolism. The first victim is hung from a tree, iron shackles around his neck and wrists. The second is burned alive in a white hood and robe. The third, staked through with a wooden cross.
Someone is sending a message, one that calls back to a dirty time in our nation's history, but what does it all mean? Rick Killing has no idea. He's a man of failed promise who let his life slip off track and now only wants to get his own house in order. But as the murders continue, he finds that the focus is on him. Why? Is he the next target, or the next reason?
To answer those high-stakes questions, to reclaim
the life he wants, Rick will have to go straight through men with plans for a new, mad world order; men who kill for cold purpose. It ends with a challenge to everything Rick has ever held close and a threat to the lives of those nearest to him.

It started with an off-hand comment by my 4th grade son's teacher: "There aren't a lot of books for 10 year old boys."

I thought: "Really?" By the time the teacher conference finished, I'd already plotted my course. Six months later I presented the first Raimy Rylan book - The World Serpent - to his class and gave everyone a copy. During the writing, I'd also decided I should do one for every grade he ascends, each increasing in complexity, language and theme. For those keeping score, that's a 9-book series. I'd essentially locked myself into a decade of the same characters.

I'm not very smart that way.

But wait, it gets better. I thought: "Why not take my backlog of adult thriller manuscripts and publish them as well? Kids' books in the spring, adult books in the fall."

Told you I'm not very smart. But here we are anyway. The World Serpent came out Spring 2014. Killing the Man arrived Fall 2014. Raimy Rylan, Chase of the Samurai dropped in Spring 2015. The Killing Face came out in Winter 2015.

Somebody stop me from thinking of anything else.

Learn more about Kenneth B Humphrey

Reviews of Killing The Man-Black Edition by Kenneth B Humphrey

I can only assume the book's title is meant to be a double entendre. Killing the Man is the name of a conspiracy in the plot, but could also refer to Rick Killing, the Man. And who and what Rick Killing is captures the entire story.

Rick Johann Killing, Loss Prevention Mgr. at a major big box store – 24 Y.O. He's an ex-sports star who ran away from a career as a professional football player because of his fear of fame and failure.
Maya, Rick's wife, is stubborn and acts like a vindictive child at home or in public. In living with Rick, it's easy to understand why she does.

I didn't care about either character. Rick is an obnoxious smart aleck whom I felt no compassion for.
At 70% the entire story was about Rick and his attitudes and personal issues. His antagonistic character was that of a fifteen year old. The main theme of the story is more of a coming of age tale about a man whose personal issues have screwed up his entire life.
Rick stumbles upon a racial conspiracy no one else can see or wants to believe. The discovery of a racial/crime plot in his hometown brings out a higher level of pride and motivation.
From there the plot gradually swings from Rick's problems to an unbelievable plot to change the foundations of the USA. Fortunately, through his acts to protect his friends and loved ones, he finds redemption at the end.

The writing is well done, sentence structure is good and the editing is far above average. There was a problem adjusting to the author's style. Dialog would be given, and then Rick's internal thoughts would follow without being flagged with italics. After a few pages I accepted it.
Character development for the main characters was good.

On the downside, some of the action scenes were a bit contrived. The biggest example being that the police would never have condoned or been involved in the takedown portrayed at the end.

The beginning chapters of the book paint Rick as a imperfect, smart mouthed ass and makes it hard to take him seriously or have compassion for him. It was hard for me to stay with the story because I disliked the character. However, by the end Rick found a purpose and broke out of the shell he had built around himself.

I can't recommend Killing the Man highly, but it turned out to be a good read.

You have subscribed to alerts for Kenneth B Humphrey.

You have been added to Kenneth B Humphrey's favorite list.

You can also sign-up to receive email notifications whenever Kenneth B Humphrey releases a new book.