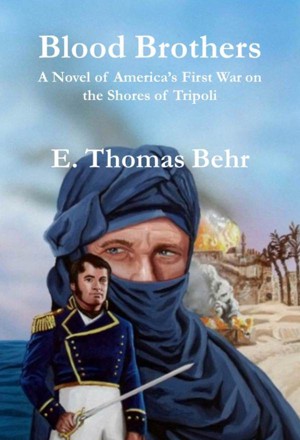 A gripping historical novel of America's first attempt to put a pro-American ruler on the throne of an Islamic state.

Two half brothers meet for the first time in the war-ravaged Mediterranean: one a cynical soldier of fortune, the other a headstrong American naval captain.

The challenge: will the bond of blood that they share be stronger than the history of bloodshed that separates them? More
“If I needed someone to slit a throat or steal a purse, William Eaton thought, I would come here to find him.”

In 1805, in the war-ravaged Mediterranean, William Eaton, an American army officer and secret agent for Thomas Jefferson, enters a squalid tavern in the roughest part of Malta for a critical meeting with a man he needs–but also has reason to distrust.

Eaton is plotting a daring venture: the invasion of Tripoli to liberate three hundred Americans held hostage by the Pasha of Tripoli, place a pro-American ruler on Tripoli’s throne, and bring freedom to a part of the world that has known only tyranny.

His appointment: Henry Doyle, the cynical soldier of fortune who will guide Eaton’s rag tag invading army of Arabs, European mercenaries, and seven US Marines across five hundred miles of merciless desert.

Eaton’s mission throws together two unlikely allies: Doyle and the half-brother he never knew he had, Peter Kirkpatrick, the young, brashly confident captain of the USS Eagle. Raised by the Mohawk Indians in the 1770’s, Doyle’s memories of the destruction of his people by Americans during the Revolution are still strong – and bitter. He decides to help the Americans for his own purposes.

Like the country he serves, Peter Kirkpatrick is driven by the need to demonstrate the power of America’s ideals the only way he understands: victory over America’s enemies. At sea, the victories come easily. He leads the crew of the USS Eagle in ship against ship battles in which American skill and courage are invincible.

When he joins General William Eaton and a handful of US Marines in the invasion of Tripoli, Kirkpatrick is plunged into an unfamiliar, unforgiving world that will test him and test America’s character as a nation to the breaking point. For Doyle, the question becomes: do I help my brother−or let him die?

Fans of historical novels will love the novel’s tension-filled journey into three mysterious, treacherous expanses: the Mediterranean Sea, the equally vast Sahara Desert, and the ancient, corrupt cities of Egypt−all capable of swallowing up dreams−and lives.

Tom Behr is a management consultant specializing in global leadership development and sales strategies for multinational corporations. A small boat sailor since childhood, his love of novels of the sea began with Kenneth Roberts and C.S. Forrester and turned into addiction when he discovered Patrick O'Brian.

If you liked The Most Bold and Daring Act, you’ll want to look at his forthcoming full-length novel, Blood Brothers, set in America’s 1805 war against the Barbary Pirates.
http://tombehrbloodbrothers.wordpress.com

Tom Behr divides his time between the 1730’s farmhouse in New Jersey that he and his wife JoAnn have been restoring for decades (in an act of love or madness)and a summer home in Lunenburg, Nova Scotia.

His prior publications include a book, The Tao of Sales: The Easy Way to Sell in Tough Times (published in English, Spanish, Dutch, Portuguese, and Russian) as well as numerous papers and magazine articles in professional journals.

He received a B.A. in English from Colgate University, a M.A. in American Literature from Middlebury College, and a Ph.D. from Princeton University in English Renaissance and 18th Century Literature.

Tom Behr's Blood Brothers Novel
Two half-brothers meet in war-torn North Africa. One is a United States Naval Officer, the other a Muslim spy. The question: is the blood they share from birth stronger than the history of bloodshed between them? View the video trailer for Tom Behr's novel Blood Brothers!

Blood Brothers Trailer Video
Why you should read Tom Behr's Blood Brothers: A novel of courage and treachery on the shores of Tripoli.

You have subscribed to alerts for Tom Behr.

You have been added to Tom Behr's favorite list.

You can also sign-up to receive email notifications whenever Tom Behr releases a new book.