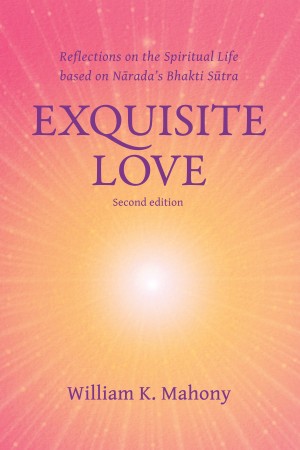 Exquisite Love: Reflections on the Spiritual Life Based on Nārada’s Bhakti Sūtra

Basing his reflections on the understanding that God is absolute Love, Mahony speaks of a divine Heart present in our own human sentiments and expressions of love in all its modes, directions and degrees of intensity. He offers readers guidance into ways a Heart-centered spiritual life can open them ever more fully to the reality of Love itself.
Available ebook formats: epub
Price: $9.99 USD
Buy Add to Library Give as a Gift
How gifting works
Create Widget
Tags: god divinity sanskrit indian spirituality sanskrit translation sanskrit sutras yoga philosophy
About William K. Mahony

William K. Mahony, PhD, is the Charles A. Dana Professor of Religion at Davidson College. Holding academic degrees from Williams College, Yale University and the University of Chicago, he served as one of the editors of the first edition of the 16-volume Encyclopedia of Religion and as President of the Muktabodha Indological Research Institute. The recipient of several teaching awards and of a National Endowment for the Humanities fellowship, his research and teaching center on the contemplative and devotional dimensions of religions arising in India. His publications include The Artful Universe: An Introduction to the Vedic Religious Imagination, published by State University of New York Press. Readers of Exquisite Love will see that he integrates his scholarship with sensibilities and perspectives informed by his own spiritual practice. In addition to his academic work, he leads workshops and retreats on the philosophy of yoga as presented in texts from India and on the cultivation and refinement of the yogic life.

Reviews of Exquisite Love: Reflections on the Spiritual Life Based on Nārada’s Bhakti Sūtra by William K. Mahony

You have subscribed to alerts for William K. Mahony.

You have been added to William K. Mahony's favorite list.

You can also sign-up to receive email notifications whenever William K. Mahony releases a new book.