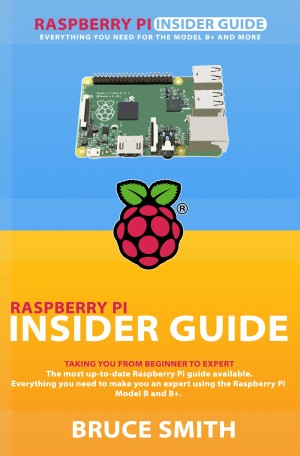 Taking you from beginner to expert. Even as an absolute beginner you will start on a journey that will ultimately leave you knowledgeable and with the confidence to work your Raspberry Pi to the limit. All you need is this book and some time to work through it.

The world of computing moves fast and since the Raspberry Pi was launched in 2012, a lot has changed. Raspberry Pi Insider Guide is the most complete up-to-date guide available. This comprehensive volume covers the Raspberry Pi and its software as it is today.

What you do with your Raspberry Pi will be driven by your interests and perhaps the interests of your family. High on the priority list is to learn, to experiment and to enjoy - Raspberry Pi Insider Guide will show you how.

Raspberry Pi Insider Guide is organised in seven sections, each containing chapters aimed at taking you the next step. From connecting your Raspberry Pi to choosing and selecting add-ons and using the Raspbian Operating System and desktop environment, you will be well on your way to expert status. Raspberry Pi Insider Guide will show you how to use hard drives and printers and how to connect cameras to take great pictures. Create your own website and then a stunning media centre to manage all your TV and music needs. You’ll even learn how to make your Pi speak and create an amazing home office using free world-class software.

Moving on, you will learn to master programming and become proficient in some of the industry standard languages available to you, including Bash, Python, Scratch and assembly language. Learn about other Operating Systems available for the Raspberry Pi, including RISC OS , Pidora and Arch Linux. Finally, discover the Raspberry Pi board itself, and find out how you can use the GPIO port to connect and control the outside world using simple examples.

Raspberry Pi Insider Guide will show you many things including how to:

* select the bare essentials you will need to get your Raspberry Pi up and running.
* copy and install the Raspbian Operating System.
* identify and connect everything together, switch it on and get it all working.
* use the command line to issue instructions and access important information.
* use the Desktop environment to run programs and games.
* use essential software to maintain your Raspberry Pi in tip-top condition.
* add additional devices such as disk drives, printers and cameras.
* have fun with the Camera Module or a webcam and take and edit photos including using time lapse photography.
* play high definition videos and top quality sound including music.
* start to program in several industry-standard languages including Python.
* create a simple website for use as a home information centre or anything you want!
* update and upgrade your Raspberry Pi and find and install new software.
* install and use LibreOffice for all your administrative and business needs.
* create a media centre and access great free-to-air TV and video channels.
* make your Raspberry Pi talk!
* install and use RISC OS as a second Operating System and become familiar with Pidora and Arch Linux.
* understand the components on the Raspberry Pi and what they do.
* connect devices to the GPIO port and use them from a language of your choice.
* make your Raspberry Pi go faster by selecting Turbo mode.
* ideal for beginners, the Raspberry Pi Insider Guide assumes no prior knowledge and will turn you into an expert.

This book covers the all models including the A, B, A+ and B+.
Download: epub
Price: Free! USD
Add to Library
Create Widget
Tags: linux books dummies guide raspberry pi beginners book raspbian
About Bruce Smith

Bruce Smith is a full-time author and awarding winning journalist. With over 100 books published he has been writing about home computers and sport for over 30 years.

With the arrival of the BBC Micro his first magazine work was published and he started to write for a variety of computer publications including Computing Today and Acorn User. A number of book contracts encouraged him to pursue this career professionally. His publishers include BBC, Virgin Books, Rough Guides, Collins and Headline and many of his books have been translated into other languages including Japanese, Italian, Dutch and French.

In the late 1980’s he teamed up with best friend David Atherton to form Dabs Press which ultimately became dabs.com the number one on-line retailer of electronic goods. (The name Dabs coming from the initials of the two partners.) After Dabs stopped publishing books to concentrate on retailing, Bruce formed Bruce Smith Books which became the number one publishing house for Commodore Amiga titles.

A number of business publishing ventures included the first football business magazine - Football Decision, Non League Football Monthly, and Stadium & Arena Management magazine (SAM). The latter soon became the most popular pan-global magazine for decision makers in the industry. Using knowledge gained from close contacts in the industry Bruce traveled the world promoting the publication and undertaking a variety of consultancy roles. He designed the waste infrastructure at Arsenal’s Emirates Stadium and also provided consultancy services to The FA during the design and re-building of Wembley Stadium.

Bruce has also undertaken a number of broadcasting roles. He partnered Carole Vorderman for BBC TV’s successful The Software Show. In 1998 he joined Channel 4’s Big Breakfast team initially for the World Cup but then for subsequent semi regular roles. He also appeared as football pundit on a number of BBC Radio Stations and on TV for BBC World Service News and Sports programmes. He spent several years freelancing as a regular match commentator and summariser for BBC Three Counties Radio.

Bruce Smith was born in Bethnal Green, East London and is currently living in Sydney where he continues to write. He is married and has four children.

Bruce can be contacted via his website at www.brucesmith.info

You have subscribed to alerts for Bruce Smith.

You have been added to Bruce Smith's favorite list.

You can also sign-up to receive email notifications whenever Bruce Smith releases a new book.