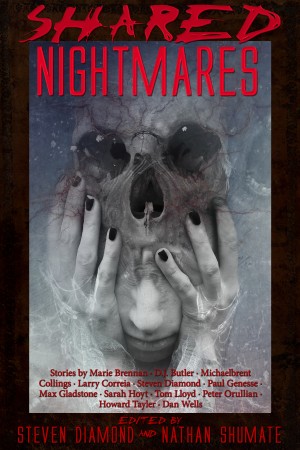 Contents:
“Father’s Day” by Larry Correia
“Dreamcatcher” by Sarah Hoyt
“Incubation” by D.J. Butler
“The Devil On My Shoulder” by Tom Lloyd
“Onnen” by Paul Genesse
“To Dream Awake, to Sleep the Real” by Michaelbrent Collings
“What Hellhounds Dream” by Steven Diamond
“The Damnation of St. Teresa of Ávila” by Marie Brennan
“Man in the Middle” by Max Gladstone
“U.I.” by Howard Tayler
“The Quality of Light is Not Strain'd” by Peter Orullian
“Health and Wellness” by Dan Wells
Available ebook formats: epub mobi html
First 20% Sample: epub mobi (Kindle) Online Reader
Price: $2.99 USD
Buy Add to Library Give as a Gift
How gifting works
Create Widget
Tags: nightmares horror anthology 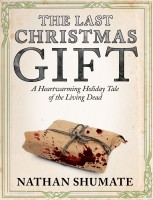 Shared Nightmares is a collection of short stories whose central theme revolves around dreams, but more accurately, nightmares. That's about the only thing these stories have in common as the authors tell us tales that span all matter of genres. While horror is the overriding element, some authors make use of other elements: science fiction, historical fiction, and urban fantasy. Some stories rely on visceral action, while others suspense. Fortunately, none of these stories wander down Elm Street, and for that, I'm grateful.

Please indulge me as I offer brief comments about each story.

The anthology opens with “Father’s Day” by Larry Correia. Aliens have invaded Earth and are attacking us through our dreams. And we're losing. Correia does a stand up job with his protagonist, as he fights a bureaucracy in order to protect his daughter.

In “Dreamcatcher”, Sarah Hoyt warns us that things in the dream-world wants to become real. There are guardians who keep the nightmares at bay, and it helps to keep an ax—a very sharp ax—close at hand.

The message I got from D.J. Butler's “Incubation” is that regret is a nightmare that you can't wake up from. It takes some time before we learn what the unreliable narrator has done, but Butler drops us enough clues along the way to piece together this crime scene.

The devil has the Adam's number in Tom Lloyd's “The Devil On My Shoulder”. Every time Adam wakes up, whether from actual sleep or blackouts, he discovers that he's been up to no good. Pity him, but pray you never meet him. Lloyd does a great job bringing the reader along on Adam's senseless ride through misery and then rewards Adam (and the reader) by revealing his purpose.

The first of the historical fiction pieces is “Onnen” by Paul Genesse. Having visited the Kyoto imperial palace, he was inspired by its strange, bleak history to write this story. It's an excellent tale of a woman's scorn and her unquenchable thirst for revenge.

In “To Dream Awake, to Sleep the Real” by Michaelbrent Collings, Booker Nyx talks about the dream-like bliss of the early days of marriage: "Existing with one foot in dream, and the other in a place where the world was seen as it truly was: a place of magic, and wonder, and light, and infinite possibility." But then children come along, and the responsibility of parenthood kills the dream. Booker yearns to return to that dream. Collins does a solid job with his sad yet familiar portrayal of Booker's life.

“What Hellhounds Dream” is an action-packed urban fantasy story from Steven Diamond, who's also one of the editors. It was a fun story that seemed like it could be expanded to novel length.

“The Damnation of St. Teresa of Ávila” by Marie Brennan is the other historical fiction piece. The titular character died right at the time when Spain transitioned from the Julian calendar to the Gregorian calendar, whereupon ten days were lost. In Brennan's story, St. Teresa's death lasted for those ten days. Drawing from St. Teresa's life and writings, Brennan skillfully paints an all too real picture of the woman as she hovered between life and death.

“Man in the Middle” by Max Gladstone was another fun piece. It appears to be something out of his Craft Sequence series. If you're like me and haven't read anything about it, there's a bit of dead gods and scientific sounding magic (which reminded me of Stross's Laundry) that keeps the world—at least an alternate version of ours—running. This story concerns a trip into a nightmare where Tara discovers a remnant from the God Wars. After reading this story, I feel compelled to dive into this series.

A video game that you play in your sleep is the subject of “U.I.” by Howard Tayler. The game is still in beta as the protagonist is testing the game for the developer. Rather than just lamely showing the game action, Tayler presents their conversations, which shows the protagonist's progress in getting caught up in the game.

“The Quality of Light is Not Strain’d” by Peter Orullian was a difficult read due to the subject matter. That's not to say it wasn't a good story. It was well-written, and the difficult parts were tastefully composed. I find that the most disturbing horror stories are not the ones with visceral gore, but rather the mundane acts that are carried out by good people in desperate situations. This is one of those stories.

The anthology concludes with “Health and Wellness” by Dan Wells. It follows a pair of Indian immigrants who are here on work visas and take these special vitamins generously provided by the U.S. government. It's a delightful tale of paranoia and the paranormal.

Editors Steven Diamond and Nathan Shumate have done a fantastic job corralling these disparate tales into a cohesive collection. If you prefer your horror to be on the literary end of the spectrum, without the usual tired clichés, then check out Shared Nightmares.

Full Disclosure: I received a complementary copy in exchange for an honest review.

You have subscribed to alerts for Nathan Shumate.