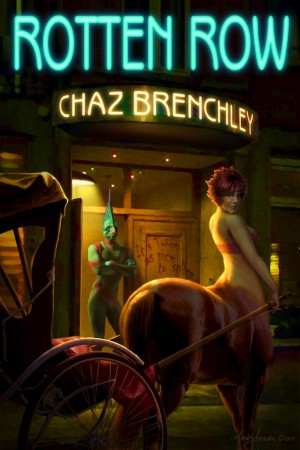 By Chaz Brenchley
Rotten Row is a space station where people can transfigure their own bodies. Outcasts from decent society, they rebuild themselves with wings and hooves and worse. DuLaine is an artist of another kind, here only to observe - but all art is about identity. Where one blurs into the other, what is art worth and how can anyone be certain who they are? More
Rotten Row is the worst place we’ve made.

Humankind can travel to the stars — but only those content to be flung as a datastream through space, flitting from male to female, dark to fair, one random discard body to the next. Those who go are the Upshot, rare individuals subject to their own rigid laws.

And then there’s Rotten Row.

Outcasts in breach of all codes, in Rotten Row people design their own bodies and sell them on for re-use after. Outlandish bodies: furred and feathered, winged and hooved and worse.

duLaine is an artist, but all art is about identity. Where one blurs into the other beyond physical limits and legal restraint, what is art worth and how can anyone be certain who they are?
Available ebook formats: epub
Price: $2.99 USD
Buy Add to Library Give as a Gift
How gifting works
Create Widget
Tags: artist identity space station identity theft centaur
About Chaz Brenchley

Chaz Brenchley has been making a living as a writer since the age of eighteen. He is the author of nine thrillers, most recently Shelter; two fantasy series, The Books of Outremer and Selling Water by the River; and two ghost stories, House of Doors and House of Bells. As Daniel Fox, he has published a Chinese-based fantasy series, beginning with Dragon in Chains; as Ben Macallan an urban fantasy series, beginning with Desdaemona. A British Fantasy Award winner, he has also published books for children and more than 500 short stories in various genres. 2014 will see publication of two new books, a short novel - Being Small - and a collection, Bitter Waters. His time as crimewriter-in-residence on a sculpture project in Sunderland resulted in the earlier collection Blood Waters. His first play, A Cold Coming, premiered and toured in 2007. He is a prizewinning ex-poet, and has been writer in residence at the University of Northumbria. He was Northern Writer of the Year 2000. Chaz has recently married and moved from Newcastle to California, with two squabbling cats and a famous teddy bear.

You have subscribed to alerts for Chaz Brenchley.

You have been added to Chaz Brenchley's favorite list.

You can also sign-up to receive email notifications whenever Chaz Brenchley releases a new book.