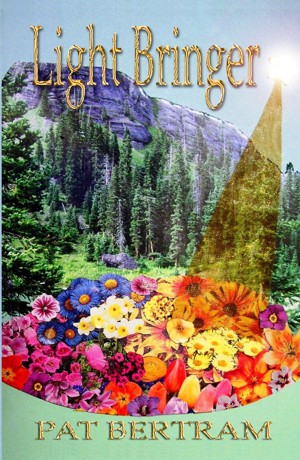 "Brilliant!" —Suzanne Francis, author of the Song of the Arkafina series

"Pat Bertram has a marvelous ability to write the longest parables in all of literature. She unglues the world as it is perceived and rebuilds it in a wiser and more beautiful way." —Lazarus Barnhill, author of The Medicine People and Lacey Took a Holiday

"Light Bringer is one of the most unique novels I have had the pleasure to read in a long time. Ms. Bertram’s fascinating characters and original subplots make this a page-turner I simply could not put down." —Deborah J Ledford, author of Staccato and Snare

No wonder she felt tired—it was still night. She was about to climb back into bed when she remembered what Luke had said about the setting moon illuminating the outlines of the houses where the white tribe had lived. Afraid of missing the phenomenon, she didn’t even take time to snatch a robe to throw over the long T-shirt she wore, but dashed to the front door, yanked it open, and stepped out onto the porch.

She gaped at the town. By outlines, she’d thought Luke meant a faint tracing on the ground where the foundations had been, but this . . . this was a complete village, each exquisite stone house solidly visible. Though the stones weren’t uniform, they fit together snugly, like a miniature version of the megalithic ruins she’d seen in pictures of Cuzco. The roofs seemed to be made of rough wooden shingles, and the windows were covered with what appeared to be mats woven of dried grasses.

Seeing the door of the nearest house open a crack, she froze.

The door opened wider, and a sleek, hairless white cat with outsize ears and large slanted eyes sneaked outside. It looked around as though proud of its accomplishment, then sat back on its haunches and washed its face.

Becka felt a giggle percolate to her throat. She tried to swallow her amusement, but a tiny gurgle escaped.

The cat swiveled its head in her direction and focused its luminescent eyes on her.

She gazed at the hairless creature, unable to look away. What is it they say about staring too long into the abyss? Make sure it isn’t staring back at you?

She shivered, but still couldn’t avert her eyes.

When strange things happen people go to Chalcedony. But what is so special about the little town?


Helen Jenks’ life changed with a drive home on a snowy night. That change came in the form of an infant girl, who she calls Rena, which she finds abandoned on her doorstep.

It becomes immediately apparent that Rena is not your usual kind of abandoned-on-the-doorstep baby. There is something special about the child. Helen soon finds herself living on the run with the child, but on the run from who or what?

And that is where her story ends and the real story begins.

Philip Hansen opens his door to unexpected guests, Agent’s Derrick and Hugh from the National Security Agency. Philip immediately suspects they are there to discuss the books he’s been checking out at the library. He sounds borderline crazy-guy conspiracy theorist, but Philip quickly shows himself to be no crazier than anyone else who thinks aliens are visiting Earth.

With a little help from an unlikely source, Philip escapes the two agents, who aren’t who they claim to be, and finds himself drawn involuntarily on a path not of his choosing.

Becka Johnson, baby Rena grown up and with a new name, returns to Chalcedony thirty-seven years after her adoptive mother found her.

Becka has decided it’s time to find the answers to her lifelong questions that center around “who am I?” And she believes those answers can be found in Chalcedony, Colorado where her life started on a snowy night on a stranger’s doorstep.

In a financial bind, Jane Keeler finds herself in Chalcedony searching for her sister George Keeler. Instead of finding her sister, she discovers an empty house, ransacked office, and abandoned car.

Georgy’s apparent wild ways make things difficult for Jane as she finds herself drawn by the need to investigate this mystery and learn her sister’s whereabouts. Only no one seems to believe her or to even care.


When the trio converges on Chalcedony with no knowledge of each other, things immediately take a turn for the strange.

Philip Hansen arrives to find himself thrust into the arms of Becka Johnson, literally, when he’s dropped off at her doorstep.

Things soon heat up for Philip and Becka when the strange things happening to each of them grow in intensity with their proximity, leading them forward on an adventure of discovery.

Jane is pulled into the strange events surrounding Philip and Becka, finding herself drawn into the midst of a bigger mystery than she’d anticipated.

In Light Bringer, Pat Bertram weaves a fascinating tale of a group of people connected by events in the past, beginning before they were even born, who are inexorably drawn together for the culmination of what was started so many decades before.

In drawing out the strange events linking these three, I also had the impression that the small town of Chalcedony, Colorado hides other secrets that could very well find themselves revealed in another tale entirely unrelated to this story.

Pat has brought us a unique story that that keeps us guessing at every turn. She brings together an incredible wealth of knowledge so, not only do we get to enjoy a good read, we learn something as well. If you are looking for an unusual story that will take you into another world, do read LIGHT BRINGER.

If you follow my reviews you probably know I really enjoy Pat Bertram’s novels. She has a knack of taking the most puzzling premise and building it into a well-structured, logical tale, with believable characters facing the most tortuous dilemmas. In Light Bringer she brings a strange group of individuals to the small town of Chalcedony, Colorado—Becka who was abandoned on a doorstep as a baby; Philip, on the run from the authorities; mysterious government agents; a UFO hunter’s sister; and the ubiquitous corporate destroyers of peaceful scenery. In town the locals discuss conspiracy theories with disturbing glee. And outside of town there’s a mysterious field of flowers filled with music and light.
Pat Bertram’s novel soars in her descriptions of mystery and scenery. The song of the rainbow flows through the characters, binding them together, while the silence of the great unknown drives them and pulls them apart.
The unknown, when finally revealed, is satisfyingly strange, though, unlike many of the characters, I maintain a healthy respect for the integrity of scientists and science. Romantic subplots are simultaneously lyrical and down-to-earth; dialog is natural and sometimes laugh-out-loud fun; secrets of history and astronomy are intriguing; and the whole is a fascinating read—a touch of old-fashioned sci-fi, blended with modern magic and corporate greed, shaken, stirred and conspired against, then woven into beautiful words.

Disclosure: I won a free ecopy of this book from the publisher, no strings attached.

You have subscribed to alerts for Pat Bertram.