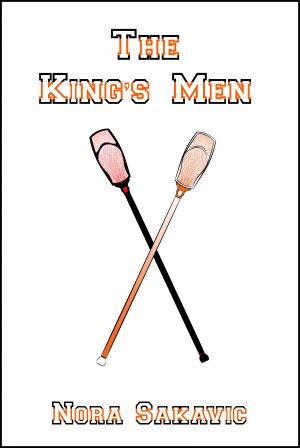 Neil Josten knew when he came to PSU he wouldn't survive the year, but with his death right around the corner he's got more reasons than ever to live. He just needs to outrun Riko a little longer, but Riko's not the only monster in Neil's life. The truth might get them all killed—or be Neil's one shot at getting out of this alive. More
Book 3 of the All for the Game Trilogy, following The Foxhole Court and The Raven King.

Neil Josten is out of time. He knew when he came to PSU he wouldn't survive the year, but with his death right around the corner he's got more reasons than ever to live.

Befriending the Foxes was inadvisable. Kissing one is unthinkable. Neil should know better than to get involved with anyone this close to the end, but Andrew's never been the easiest person to walk away from. If they both say it doesn't mean anything, maybe Neil won't regret losing it, but the one person Neil can't lie to is himself.

He's got promises to keep and a team to get to championships if he can just outrun Riko a little longer, but Riko's not the only monster in Neil's life. The truth might get them all killed—or be Neil's one shot at getting out of this alive.
Available ebook formats: epub mobi pdf rtf lrf pdb txt html
First 20% Sample: epub mobi (Kindle) lrf more Online Reader
pdb
Price: $0.99 USD
Buy Add to Library Give as a Gift
How gifting works
Create Widget
Tags: young adult college sports new adult college athletes
About Nora Sakavic

Reviews of The King's Men by Nora Sakavic

This series is just too good.

(reviewed 21 days after purchase)
Pukalovesharu reviewed on Oct. 28, 2020
(no rating)
I love this series so much that I even bought it :') thanks smashwords! my baby Neil deserves the whole world and riko, stupid butcher henchmen can go to hell. Heck I love all the foxes, i just want them to be happy 😿❤❤❤

The King's men definately is the icing on the cake that is the All For The Game trilogy. The stakes had my heart racing, both on the court and off court. Never thought i would invest emotionally in any sport but i did, i did invest in Exy. The matches were definately one of the highlights of the books. Watching the personal and professional dynamics of the fox players play out, threatening to break the team apart or unite them is another higlight. And in the center of this complex dynamic is Neil. Neil, the fixer. Neil, the man who needs fixing. Watching Neil navigate the problems of his teammates is the second most interesting highlight. (take a shot every time you stumble across the word highlight...or maybe down cracker dust LOL)

Then there i
Allow me to ramble a bit about putting myself in Neil's shoes as it relates to his relationship with Andrew. Their relationship is definately one tense and angsty relationship, full of rotten ice and holding back. Its not surprising considering the baggage these two have. Nonetheless, i do wonder if i had the emotional tolerance Neil has in handling such a withdrawn and aloof guy like Andrew. This guy is lke the anti-Prince Charming. Then again, Neil is far...far from perfect. So, idk. There was no specific point to this part, just me rambling

Anyways, I stan 100% Neil-Andrew. If you are reading my review, please read the book to understand more about this complex couple and the world that they live in full of action, intrigue, suspense and the ever looming threat of death.

I've been waiting for this book with the baited breath and the excitation that crush you if you're disappointed. I wasn't. I soooo wasn't. The King's Men is the perfect conclusion to this fantastic trilogy. Nora Sakavic writes with an intensity that takes you by the throat and doesn't let you go before you're on your knees. It's perfectly balanced, too: when you think you' won't be able to take it anymore, you get air again. In such a dark set up, the author manages to give you humor, and fluff, and the perfect ending.

Thank you so much, Ms Sakavic, for sharing the Foxes with us.

Having read the earlier versions of this trilogy, I have to say the entire series was revamped and edited to the nth degree. The storyline is tighter, to the point where I could easily envision the Foxes' story being real-life and not fiction.

Neil's life on the lam and entanglements with crime bosses isn't so farfetched at all considering all of the stories in the news about drug lords, the mafia, and other crime syndicates that have been in the news over the years.

The developing relationships between Neil and the rest of his teammate, and the transformation from barely tolerating one another to becoming a real team, were a pleasure to read. Neil may not have had faith in anything but the Foxes gave him something to believe in and Andrew served as the lynchpin to keep him from running when everything that Neil feared would happen explodes all at once.

This trilogy, and the last book especially, was a wonderful roller-coaster ride of emotions ranging from dread to elation. Although I am sad that it's over, the epilogue was satisfying and I can happily contend with imagining where Neil and Andrew (and the other Foxes) end up in life.

This trilogy is worth a hundred times more than every penny I spent on it.

I haven't been this excited for a book in a long while and now that the wait is finally over, I stayed up all night to finish it in one sitting.

Neil Josten has to suffer through a lot in this last installment. I even feared for my happy ending a few times. And why wouldn't he? He has no place for self preservation when he is convinced that his days are numbered anyway. He decides to martyr himself for his teammates, the people he chose as his new family, instead.

Even though Neil has to contend with crime bosses, the FBI and much more of his gruesome past than I could stomach, the book never strays too far from the Foxhole court and Exy and the games are as thrilling as ever.

Thankfully everything gets resolved eventually, but no one comes out without a bruise or two at the other end.

Surprisingly, the book shines in the most unexpected corner, and that is the slowly developing relationship between Neil and Andrew. After the subtlety and the implied attraction of the previous books, and after everything these characters have been through, every touch between them is immensely satisfying.

Andrew gets a bit sidelined during the action scenes in the middle part, and after wondering what he could possibly have up his sleeve after promising Neil that he could protect him, the answer is, 'not much'. Not for lack of trying though and he makes up for that with so much unexpected (and I guess unwitting) emotional support, that I am still squealing hours after finishing the story.

My only critique would be that the book is too short, not just because I am greedy and insatiable when it comes to Ms. Sakavic's writing, but I was missing more insight into the parts of the story happening 'off screen' sometimes. But these are details at best.

All in all an incredibly satisfying read and an unreserved recommendation from me. I feel a bit lost and disoriented now that the Fox's story has come to a conclusion, but I am glad that I picked these books up in the first place.

Don't forget to check out the numerous side stories on the author's blog!

Thank you for this wonderful finale to this series. I'm only sad that there is no more story. I love the characters and watching them grow into their own dysfunctional family. Btw, Ms. Sakavic, despite your fears, it was not disappointing, and worth the wait, although I was beginning to fear it would be another six months before your betas/editors would pass it to share with the rest of us. :)