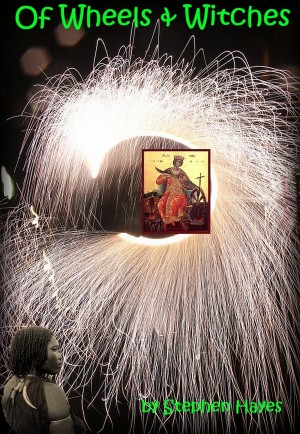 Of Wheels and Witches

Reviews of Of Wheels and Witches by Stephen Hayes

Jefferey is the main protagonist of this book, which is available from Smashwords. Jefferey is eleven, and we meet him on his way to stay at a farm in South Africa while his parents are abroad.

There’s some good description in the first chapters, as Jefferey starts to explore his new environment, and gets to know nine-year-old Catherine, the niece of his hostess. There are words in South African English here and there, reminding me each time where the story is set.

Then the story becomes darker. It’s set in the 1960s: the apartheid era of South Africa. It's written from a Christian perspective, but includes unpleasant curses from witch doctors, a great deal of tension, and some violence. As social history, I thought it excellent; I could almost feel myself living in the apartheid regime, seeing not just discrimination but anger, hatred and rampant unfairness.

The latter part of the book is fast-paced, and the characters are skilfully drawn. I doubt if teenagers would read this, since the book is about younger children, but the story is, in my view, more appropriate for those of at least 13 and older, rather than the 9-12 age-group of the main characters.

Recommended to anyone wanting to understand the apartheid regime from the perspective of children, but don’t be misled by the early chapters into expecting a gentle adventure story.

This book captures the atmosphere of apartheid era South Africa very well. The descriptions of how the Special Branch officers treat the children and some of the adults make tough reading, especially for younger readers. Tension is maintained throughout and it is hard to put the book down once you have started it. Recommended for young adults and anyone interested in South Africa in the apartheid years.