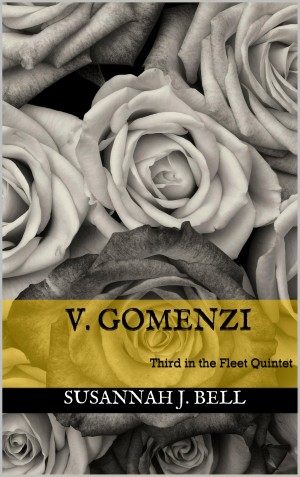 By Susannah J. Bell
Vincent Gomenzi is a mindwalker. He is also the first. Unable to mindwalk, he hunts down other mindwalkers for the Fleet - until he has to catch his own brother. Unable to live with himself, he flees Sigma and only then begins to learn the truth about the Fleet's plans and the reluctant role he has to play. More
*The Fleet must be stopped before everyone in the Sigma Sector disappears forever.*

Vincent Gomenzi leaves Earth when he is sixteen, knowing that he can never mindwalk again. The terrifying maw of the vortex waits for him if he tries to transfer out. As the first mindwalker, Fleet personnel 1, he was once the most destructive force in the Sigma Sector ...

Igen Dyce loses his fiancé to the Fleet. A baseball star on Lomensis, he forms the Lomensii branch of Recovery, an underground organisation formed to rescue those lost to the Fleet. When he meets the spectacular Sistia Scarpora, he hasn’t yet saved a single soul ...

The Angel of Deadly Enlightenment tries to escape from the Garden of Truth but is doomed to return in every new cast. When it finally works out what Truth is, the Fleet will be scarred for all eternity, the memory of their encounters setting in motion the downfall of the Sigma Sector ...

From the freelance operative to the machine city, Vincent’s jump in time leads him to Recovery. From the Garden of Truth to the Fleet installation, he learns the truth about what he has done. And from the vortex to the stone angel, he has to undo the past to save the future ...

Susannah J. Bell is a writer of science fiction and other strange and surreal works. She mostly writes novels and the occasional novelette. Her published works include A Doorway into Ultra, the Fleet Quintet and the Exodus Sequence. She lives in London in an attic flat but really wants to live in a tree. She wanted to be an astrophysicist but would settle for an alien abduction. She writes because she doesn’t know what to read.

About the Series: The Fleet Quintet

An unconventional sci-fi series in which the story isn’t linear and the books aren't sequential. On some worlds, the tech is laughably low. The hero used to be an evil entity and the heroine hides in a library. They first appear to meet inside her head. The alien enemy can’t be seen and the invasion takes so long that no one notices for several centuries. The only real angel has no wings. The strongest theme is that of immortality yet few can remember much about anything. The prevalent church is called SPIT with a lesser cult known as TRVTH, though neither know the truth about the Fleet. There’s no time travel but two of the main characters are thrown about in time. Dark themes covering metaphysics, religion and supernatural existentialism run parallel to the darkest humour, while different layers of space are explored, exploited or torn to pieces. But the greatest theme of all is love – written against a vast backdrop of shadowy entities whose purpose is never clear. Those entities are the Fleet.

Also in Series: The Fleet Quintet

Reviews of V. Gomenzi (Third in the Fleet Quintet) by Susannah J. Bell

You have subscribed to Smashwords Alerts new release notifications for Susannah J. Bell.

You have been added to Susannah J. Bell's favorite list.

You can also sign-up to receive email notifications whenever Susannah J. Bell releases a new book.