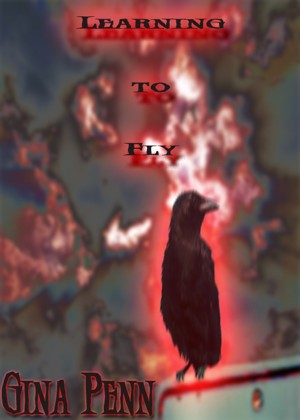 Learning To Fly is a collection of short stories that deal with revenge, love against all odds, death and murder. More
David wakes up from a drunken stupor to find a headache in his head and the dangerous end of a handgun in his face. The Tall Man has finally come for him, as he suspected he would and no matter how much David begs and pleads, he isn’t going to get away with murder.

Joseph Ryder is a best-selling author and recovering alcoholic. After overexposure with his biggest novel and a messy divorce, he finds he’s grown tired of his life and is ready for a change. Mostly he misses his wife and children but is too ashamed to confront them after so many hard times he’s given them. Until one day, he’s given a gift…

People all around you are crying, hysterical. The woman next to you won’t shut up. Everything is chaos and all you want to do is make a phone call and time is running out…

Ralph Massey is a simple man, recently retired and widowed. After falling asleep in his favorite chair, he wakes to the sound of something falling inside his house. He locates the item after a short search when he notices a flicker of movement outside his window. Upon closer inspection he sees something he never imagined he’d ever see and quickly learns that this is not a one time viewing session. But even just a peek comes with a price…
Available ebook formats: epub mobi pdf rtf lrf pdb txt html
First 15% Sample: epub mobi (Kindle) lrf more Online Reader
pdb
Price: $0.99 USD
Buy Add to Library Give as a Gift
How gifting works
Create Widget
Tags: murder revenge against all odds
About Gina Penn

An Ohio native, Gina Penn is the author of three books, including "The Dark Layer", "Learning to Fly", and the upcoming "The Storm" and "Unearthed." She supports the ASPCA with portions of the proceeds of her books and travels frequently for research. She attended Sinclair College in Dayton, Ohio.

Reviews of Learning To Fly by Gina Penn

I devoured this very interesting, compelling written work within three hours (I reference my article on book-eating). Penn tells a series of unrelated stories with a single fascinating, but horrifying theme: death. I tend to back away from a detailed synopsis on book to avoid spoilers, but this book draws the reader into many ways people experience death; from knowing it’s coming soon by another’s hand, by accident, and from the standpoint of another witnessing the death of another.

Anyone that likes a short, deep, compelling read should definitely check this work out. It’s not comedy, and isn’t meant to be. What it does is expose the inner fears we all carry about the end of our lives, and the affect the loss of life has on others. Congratulations, five out of five stars!

(reviewed 45 days after purchase)
Michelle Griffin reviewed on May 13, 2011
(no rating)
This is a great book.

This book needs a lot of work before it could be considered done.

On the physical level, a decent table of contents with hyperlinks would have made moving from one story to another easier.

Artistically, the book needs a lot of work. The author uses passive voice throughout, lessening the impact of the characters' actions. Those characters, however, needed more work. Most are insubstantial and don't ring true. Often times, the characters don't react in a believable way. For example, the guy who doesn't try to escape when he knows his life is nearing its end or the old man who can't figure out why he's turned on by a beautiful young woman.

Furthermore, there is too much telling rather than showing, which goes hand-in-hand with the passive voice. If the author showed the characters doing things instead of telling the reading about the character's actions, the stories would have had more punch.

Numerous basic grammar errors abound. These serve to distract the reader from what's on the page because he has to stop and figure out what the author is trying to say.

The most disappointing aspect of the book is that the stories show promise. Under the bad grammar, cardboard characters, and stilted dialogue, there are good ideas. Serious polishing of the work would have turned this collection into a winner.

(reviewed the day of purchase)
Erik Gustafson reviewed on April 6, 2011

This is an awesome collection of make-you-think short stories. I really enjoyed "Peek!" I think it was my favorite. Really felt for the characters. I also liked the bonus chapter of your upcoming novel- I can't wait to read the whole thing!

These are great short stories. I have only gotten to read 2 of them. But "The Gift" I really liked the ending made my eyes tear up. All good of course. :-) I recommend reading these short stories- 2 Thumbs up!! Looking forward to reading more stories from you.

(reviewed the day of purchase)
Penny Collins reviewed on March 27, 2011

What a great collection of short stories. "Peek" was by far my favorite. Thought I knew what was happening and then BING didn't see that coming. This is a must read. Can't wait too see more in the store....well done.

You have subscribed to Smashwords Alerts new release notifications for Gina Penn.

You have been added to Gina Penn's favorite list.

You can also sign-up to receive email notifications whenever Gina Penn releases a new book.