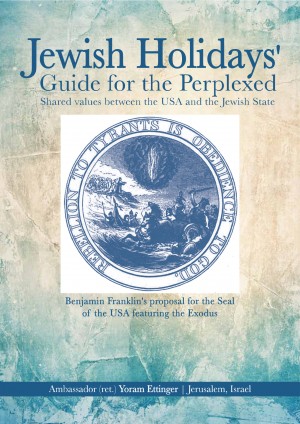 Jewish Holidays Guide for the Perplexed

By Yoram Ettinger
The user-friendly "Jewish Holidays' Guide for the Perplexed" provides succinct interpretations by Jewish Sages, easily integrated into conversations, presentations, sermons, interviews and writing. The "Guide" highlights the relevance of Jewish holidays to modern day challenges, shedding light on shared-values, which bind the US and its sole, soul ally in the Middle East: Israel, the Jewish State

He is a consultant to members of Israel’s Cabinet and Knesset, and regularly briefs US legislators and their staff on the threat of a nuclear Iran, Israel’s contribution to vital US interests, on the Palestinian issue, on the root causes of international terrorism and on other issues of bilateral concern.

Ambassador (ret.) Ettinger's OpEds have been published in Israel and in the US, and he has been interviewed on Israel's and US’ TV and radio.

A graduate of UCLA and the University of Texas at El Paso, Ambassador (ret.) Ettinger served as Minister for Congressional Affairs at Israel's Embassy in Washington, Israel's Consul General in Houston and Director of Israel's Government Press Office.

You have subscribed to alerts for Yoram Ettinger.

You have been added to Yoram Ettinger's favorite list.

You can also sign-up to receive email notifications whenever Yoram Ettinger releases a new book.