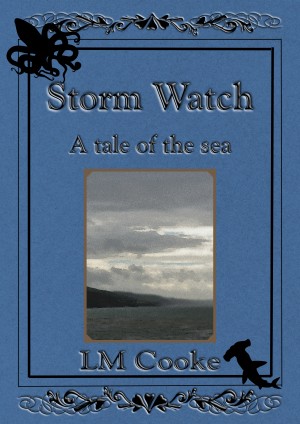 Storm Watch - A Tale of the Sea

James Fairweather has always been beloved of the sea, right from his early, unusual entry to the village. But the winds are changing, and the tides are turning, and perhaps James is not as well favoured as everyone had thought.

The air is heavy with the tang of salt. On the horizon, clouds are gathering. And something is stirring in the deep, below...

It was built like a fortress; yet no-one questioned why.
It had hundreds of uniformed wardens; almost no-one noticed.
It held strange and dangerous inmates; no-one knew.
Built in the 1870s, yet seeming to endure forever, the Asylum has seen governments rise and fall, has witnessed wars and riots. It has stories to tell, strange twisting stories of past and future. These are just a few of those stories; these are the Asylum Chronicles…
Download: epub mobi (Kindle) pdf more Online Reader
rtf lrf pdb txt
Price: Free! USD
Add to Library
Create Widget
Tags: gothic fantasy harbour sea monsters fishing town sea fantasy mythological fantasy fishmen
About LM Cooke

LM Cooke is the author of The Automata Wars, a steampunk trilogy. Volume 1, The Home Front was released in September 2012, and tells the tales of the people left at home while the soldiers on the front line take on an unknown enemy in a losing battle, while volume 2, The Front Line focuses on the fighting on the front. The concluding volume will be released in the near future.

LM Cooke is also a singer, performing her own original dark works alongside some more traditional songs. Listen out for her musical version of her short story, Storm Watch, available on www.lmcooke.bandcamp.com
In her spare time she is also co-host of the Gothic Alternative Steampunk and Progressive (GASP) Radio show on wightpartyradio.com, has recently completed a Masters Degree in West Midlands history (specialising in Victorian prostitution) and plots galactic domination, while pandering to the whims of The Jibber, feline overlord. You can find out more at www.LMCooke.com

‘The Automata Wars’ series and ‘The Asylum Chronicles’ are published by The Last Line Publishing House (http://thelastline.yolasite.com); and are available from The Last Line and other outlets.

“...transcends genre limits to such an extent that if we didn't call it Steampunk we'd have to call it something like Gothic-Sciencefiction-Crime-Thriller-Horror.” - The Last Line Publishing House on ‘The Home Front’.

You have subscribed to Smashwords Alerts new release notifications for LM Cooke.

You have been added to LM Cooke's favorite list.

You can also sign-up to receive email notifications whenever LM Cooke releases a new book.