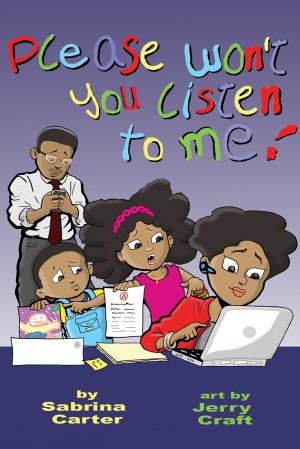 Please Won't You Listen to Me

By Sabrina Carter
The parent-child relationship determines a child’s sense of security about himself, his abilities, his relationships with others, and the world around him. “Please Won’t You Listen to Me” drives home the importance of listening to one’s children and is a fun way to enjoy time together sharing those important and not-so-important things and the wonderful feeling of actually having someone listen! More
By listening only half-heartedly, glancing at the television or running off to answer the telephone, we send the message that our child is not worthy of our time or that what they are saying is not important. Psychological literature suggests that children, who aren’t listened to or made to feel important report greater rates of tobacco and alcohol use, engage in high-risk sexual behavior and have higher levels of interpersonal conflict.

Through listening, a parent conveys the message that his child is deserving of his full, uninterrupted attention; that his child is lovable, appreciated and important. By actively listening, we provide an emotional presence and a sense of empathy, which can be more powerful than physical touch. As a result, the child learns that he is not alone with his feelings, ideals or thoughts. Being listened to stretches knowledge and emotional capacities. It helps a child feel confident, independent, safe, smart and supported.

'Please Won't You Listen to Me' is a reminder of how important listening is to our children’s overall well-being! While we are human and make mistakes, we have to stop being too busy for those whose lives we ultimately shape. “A child whose emotional tank is regularly filled is typically more resilient and less peer dependent, as well as more likely to become a confident and responsible adult.”

Sabrina Carter is a wife and mother who currently resides in New Jersey with her husband and two children. Born in Maryland, Sabrina was raised the youngest of two girls to a single mother. In an effort to provide for her children, Sabrina’s mother joined the army, leaving the then 6 year old Sabrina and her sister to live with their grandmother. It was during these early years that she discovered writing as a way to escape her circumstances and express the longings for her mother and the desires for the father that she would never know. Seeking a different kind of escape, Sabrina replaced writing with a love of math and science and in 1995, graduated from Rutgers University with a Bachelor of Science degree in Mechanical Engineering. Sabrina went on to pursue a career in technology consulting, but her passion for writing would quickly be reignited when in 2004, after returning home from work, she was greeted by her four year old daughter who came home from pre-school and revealed that she hated her hair. Heartbroken Sabrina set out to find a creative way to help her daughter deal with her fragile self image. Starting first with a poem written late one night, she read it to her daughter and to her welcome surprise, it put a smile on her face. Each night as Sabrina read the poem, her daughter seemed to become more comfortable with her hair. After two months of watching her daughter develop a more positive self image, Sabrina and her husband Elliot decided that they needed to do more. She began sharing the poem with friends and family who also encouraged her to tell the story of how simple words spoken by innocent children can impact a child's self image . So the journey began and over the next few months Sabrina began converting her poem into the book, “My Hair is Curly”, the story of a beautiful little girl with curly hair, gray eyes and a magical wish.

Since its publication, Sabrina has had the opportunity to share the book with thousands of parents, teachers and children across the country. She has also written two more books as a part of her new three part series titled, "The Impact of Positive Parent-Child Relationships". According to Sabrina, the greatest blessing of her books, in addition to the development she has seen in her children, has been the positive reaction by so many people from varying ethnicities including interracial, Jewish, African-American and Hispanic families.

You have subscribed to alerts for Sabrina Carter.

You have been added to Sabrina Carter's favorite list.

You can also sign-up to receive email notifications whenever Sabrina Carter releases a new book.