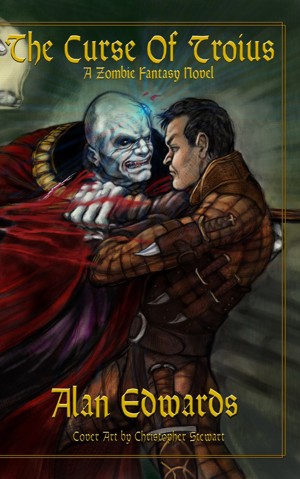 The Curse of Troius: A Zombie Fantasy Novel

By Alan Edwards
In an isolated backwater of Northreach, a powerful mage completes the work that will create the army that he needs to sweep the world and accomplish his thirst for vengeance. The village of Daneswall, a peaceful and forgotten community in Northreach, is caught in the forefront of the awakened zombie horde that grows with every farm and village it encounters. More
When a fantasy world is overrun with a mob of ravenous zombies, there are no guns to stop them. No tanks. No airstrikes. Just a man with a shovel.

In the last of the Arcane Academies, the actions of a powerful and corrupted wizard sets into motion the events that will turn the mundane world against the practicioners of magic and mark the end of the Dreaming Tower. Shunned and cast out by his fellow mages, Troius curses them all and dedicates himself to creating a scourge that will sweep the world and earn him well-deserved vengeance.

North of the bustling port city of Anticus lies a tranquil backwater, populated by independent-minded rural folk making a living among the foothills of the Kronspine Mountains. In the centuries since the fall of the Dreaming Tower, these farmers and townsfolk are unaware of a lonely, isolated tower standing alone at the foot of a forgotten mountain.

When the tower is breached by power-hungry outsiders, the final curse of the wizard Troius is unleashed on a land unprepared for the stalking horror of undeath, one that grows with every bite of its shuffling horde.

THE CURSE OF TROIUS is a zombie novel set in a unique fantasy world. Combining strong horror elements and a low-magic fantasy setting, it tells the story of the villages that get in the way of a zombie invasion and the ill-prepared people who can only hope to survive the onslaught.

Alan Edwards majored in English at the University of Florida for approximately four weeks, until the endless daily grind of non-stop investigations into whether every single mention of a long straight object was nothing more than a phallic symbol made him quickly realize that he would never make it through to actually get a less-than-useful English degree. He determinedly became a drunkard and dropout afterwards.

Later, he learned the fine art of bookkeeping, decided he enjoyed it, and eventually went back to school, this time for an Accounting degree, which he was able to complete while working full-time and attending night classes for the simple reason that there was no discussion of phallic symbols.

Becoming a stalwart and valiant accountant, he set the world afire with the speed of his T-accounts, the precision of his reconciliations, and uncanny way of balancing debits and credits. By night, he dazzled and amazed all and sundry by reading, playing computer and console games as well as tabletop role-playing games, watching TV, and playing with his dogs.

Nearly all of his time is spent with his lovely wife and companion Lisa, whose patience and love quite seriously carries him through the tribulations of life.

You have subscribed to alerts for Alan Edwards.

You have been added to Alan Edwards's favorite list.

You can also sign-up to receive email notifications whenever Alan Edwards releases a new book.