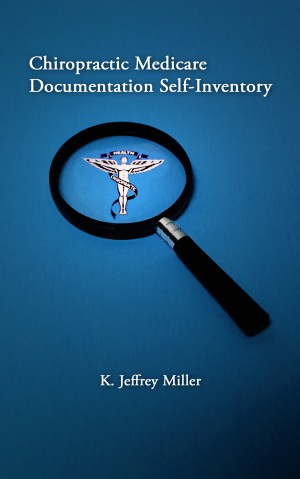 By Dr. K. Jeffrey Miller
Medicare documentation is more scrutinized today than ever before, and most doctors are being driven crazy by the scrutiny. This book, Chiropractic Medicare Documentation Self-Inventory was written to help doctors document properly, increase the odds of obtaining fair reimbursement, and get some peace of mind. More
This book is a must have for all doctors of chiropractic!

Medicare documentation is more scrutinized today than ever before, and most doctors are being driven crazy by the scrutiny. This book, Chiropractic Medicare Documentation Self-Inventory was written to help doctors document properly, increase the odds of obtaining fair reimbursement, and get some peace of mind.

Using the text is simple. Doctors only need to pull a Medicare file and begin answering the questions in the book. The book guides doctors through 70 individual questions covering the Medicare case from a global perspective, the initial evaluation, and subsequent daily visits.

The answers to the majority of questions regarding the records should be “Yes.” If the answer is no, doctors can tap the “No” answer (highlighted in blue) and the book will redirect to the explanation of the related documentation principle. The explanation assists doctors in understanding the Medicare documentation concepts and requirements.

The goal is to give doctors the ability to document appropriately and answer every question correctly. This will help assure the doctors' Medicare documentation is compliant.

The author of the text, Dr. K. Jeffrey Miller, is a chiropractor with more than 27 years of experience and certifications in peer-utilization review and medical compliance. The book offers doctors the chance to find and correct their own documentation mistakes without the use of an expensive consultant.

In 1997, Dr. Miller completed boards given by the National Strength and Conditioning Association (NSCA) for designation as a certified strength and conditioning specialist (CSCS). He also holds personal trainer certifications with the NSCA and the American Council on Exercise. In 2002, he completed coursework and boards for the Certified Chiropractic Sports Practitioner (CCSP) program.

Dr. Miller has completed course work and certification in utilization and peer review through Logan College of Chiropractic in 1994 and served on the Peer Review Committee for both the Kentucky Board of Worker’s Compensation and the Kentucky Board of Chiropractic Examiners. His most recent certification in the field of documentation and compliance was awarded in August of 2013 when he completed study and testing to become a Medical Compliance Specialist (MCS-P).

In 17 years of private practice, Dr. Miller published more than 100 articles in 30 publications and wrote three books. Book titles include On-The-Job C.A.R.E. a manual on occupational health consulting, now in its third edition; Practical Assessment of the Chiropractic Patient (2002); and Practicing Chiropractic (2005), both published by MPA Media.

In 2002, Dr. Miller was honored by Business First Magazine as one of the top 40 business professionals in the Louisville Metropolitan Area under the age of 40 (The 40 under 40 Award).

Dr. Miller left private practice to teach at Palmer College of Chiropractic in Port Orange, Florida in 2005. As an assistant professor he taught courses in the function and structure departments teaching primarily spinal diagnosis, orthopedic and neurological examination, and skeletal radiology. During his time at Palmer Florida he published his fourth and fifth books: Stat Spinal Examination: How to Examine a Patient Who Is Paralyzed by Spasm or Writhing in Pain and The Insurance Game: Winning the Battle for Reimbursement.

In April of 2007, Dr. Miller left Palmer Florida to serve as the Chairman of the Department of Clinical Sciences and Clinic Director at Cleveland Chiropractic College in Kansas City, Missouri and Overland Park, Kansas.

While at Cleveland he published Orthopedic and Neurological Examination in a Flash through Lippincott, Williams and Wilkins Publishing. The study cards cover 240 of the most useful orthopedic and neurological tests for day to day chiropractic practice.

Dr. Miller left Cleveland to become an Associate Director of Education and Research for Foot Levelers Inc. in Roanoke, Virginia. He held this position for three years before accepting the position of Director of Clinical Operations for Tuck Chiropractic Clinics in the New River and Roanoke Valleys of Virginia, a position he still holds.

In 2010 Miller’s first book outside the chiropractic field was published. The book, The Road to Happiness Is Always Under Construction, has been acclaimed in reviews and has resulted in guest appearances on radio programs around the country.

The United Virginia Chiropractic Association has twice (2011 and 2012) awarded Miller the Stoke Award for his writings of patient oriented literature. The association also awarded Miller with the 2011 Literary Award for a peer-reviewed publication on fluctuating asymmetry and leg length inequality; a paper co-authored with Dr. Steve Troyanovich of Advanced Chiropractic in Normal, IL.

Miller and his wife Kim have four children and two grandchildren and reside in Roanoke, Virginia.

You have subscribed to alerts for Dr. K. Jeffrey Miller.

Would you like to favorite Dr. K. Jeffrey Miller?

You have been added to Dr. K. Jeffrey Miller's favorite list.