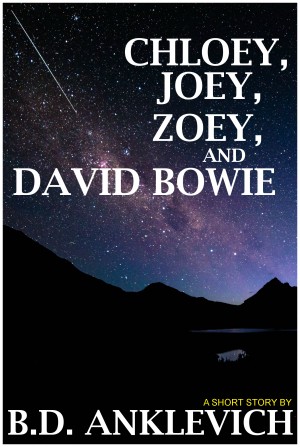 By B.D. Anklevich
Three best friends who happen to have rhyming names are out for fun on the last night of summer, when they see something unusual. Was it a meteorite? Or something else? What they find is probably not what you expect! More
Chloey, Joey, and Zoey are best friends living in a small Montana town. It's the last night of summer, and they head out together to do their best to live it up before school comes along to use up all of their free time. While they're out, however, they see something strange. A meteorite comes crashing to the ground just over the next hill. They decide to investigate, hoping to get a chance to see whatever it was that generated that brilliant streak of light. When they get there, however, something completely different is waiting for them.

B.D. Anklevich is a husband and father of four children. With the little time left over after he takes care of those responsibilities, he podcasts with his good friend and fellow writer, Rish Outfield. Their primary show is called The Dunesteef Audio Fiction Magazine, in which they release fullcast productions of genre short stories for free consumption (found at dunesteef.com). Their secondary show is called Dunesteef's That Gets My Goat podcast, in which they discuss geek related topics like books, movies, conventions, writing, and so forth (found at dunesteef.blogspot.com). B.D. Anklevich also does a solo podcast called The Anklecast, in which he discusses his adventures in writing and life (found at BigAnklevich.blogspot.com).

After all of that, he does his best to make room for writing, a passion that he has been unable to give up on despite all the advice he was given to do so. Writers always seem to say that if you can be happy doing anything besides writing, do it. Only write if the lack of writing makes you unhappy. That phrase perfectly sums up his relationship with writing. His mood can very often be traced to whether he has been successful in finding some time to write that day or not. Somehow, his entire self-worth seems to be wrapped up in his writing successes and failures.

Outside writing and podcasting, B.D. Anklevich enjoys sports, particularly American football and European football (what he likes to affectionately call soccer). He also likes running for fun and fitness, and crossfit. Unfortunately he also very much enjoys unhealthy food like pizza and unhealthy sugary drinks like Mountain Dew and Dr. Pepper. Those tend to counteract any progress he makes with the running and workouts. It's a constant battle.

Some of his favorite film/television/book properties are Firefly, Game of Thrones (or A Song of Ice and Fire...why didn't they call the TV show that? Weird, right?), Ender's Game, Wheel of Time, Dragonriders of Pern, Star Wars, Marvel Comics, The Lord of the Rings, Dragonlance, and so on and so on.

You have subscribed to alerts for B.D. Anklevich.

You have been added to B.D. Anklevich's favorite list.

You can also sign-up to receive email notifications whenever B.D. Anklevich releases a new book.