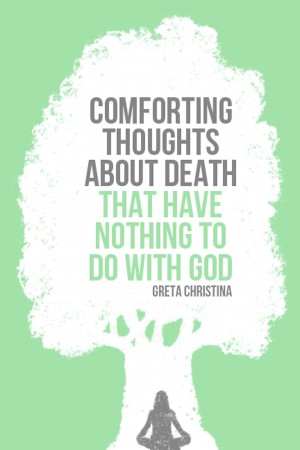 Comforting Thoughts About Death That Have Nothing to Do with God

By Greta Christina
If you don't believe in God or an afterlife -- how do you cope with death?

Accepting death is never easy. But we don't need religion to find peace, comfort, and solace in the face of death. In this mini-book collection of essays, prominent atheist author Greta Christina offers secular ways to handle your own mortality and the death of those you love. More
If you don't believe in God or an afterlife -- how do you cope with death?

Accepting death is never easy. But we don't need religion to find peace, comfort, and solace in the face of death. In this mini-book collection of essays, prominent atheist author Greta Christina offers secular ways to handle your own mortality and the death of those you love.

Blending intensely personal experience with compassionate, down-to-earth wisdom, Christina ("Coming Out Atheist" and "Why Are You Atheists So Angry?") explores a variety of natural philosophies of death. She shows how reality can be more comforting than illusion, shatters the myth that there are no atheists in foxholes -- and tells how humanism got her through one of the grimmest times of her life.

“In this book Greta Christina tackles the subject of death with the insight of a philosopher and the relaxed candor of a friend — that really cool, intelligent friend who understands and cares.”
-David Niose, author of Fighting Back the Right: Reclaiming America from the Attack on Reason

“Required reading for anyone alive. Greta Christina’s clear, bold, gentle and endlessly thought-provoking writing style constantly reminds me why I love her. She provides elegant proof that the even the hardest truths can be as beautiful, wonderful and uplifting as any other facet of our existence.”
-David Fitzgerald, author of Nailed and The Complete Heretic’s Guide to Western Religion

“When I was very young, I lost someone close to me in a car accident. Almost more painful than the loss was the way by which those around me attempted to find meaning in the senseless death of a young person. This is the book that seven-year-old me needed instead of the endless religious tracts that assured me that everything happens for a reason.”
-Heina Dadabhoy, Heinous Dealings blog

“Bravo, Greta Christina. Your book is a feat of logic, wisdom, compassion, insight, humor, and lived experience presented in the most accessible way. Your ideas are compelling and I wish your words could be made available in hotel rooms everywhere, tucked into the drawer of the nightstand, in addition to hospital waiting rooms, train and bus stations, airports and classrooms. Death is certainly a Big Deal but humanism and non-belief have plenty of comfort to offer, as you so eloquently have put forth. In short, ‘What she said.'”
-Nina Hartley, author of Nina Hartley’s Guide to Total Sex

“Greta Christina continues to provide unique advice and information to the growing community of seculars. We all need to consider our mortality and learn positive and productive ways to deal with our inevitable deadline. Thanks for this little book of wisdom. Christina has written a handbook we can all use. But it should be in the hands of every hospital and military chaplain, every hospice care giver,even ministers, etc. No secular person should be subjected to supernatural ideas and wishful thinking when they are dealing with death, dying and grief.”
-Darrel Ray, founder, Recovering from Religion

“Atheism frees us to craft our own meaning for life, but we must still confront the specter of death. In this brief-yet-essential volume, Greta Christina presents an array of humanist perspectives that provide very real comfort and meaning in the face of death.”
-Neil Wehneman, Development Director, Secular Student Alliance
Available ebook formats: epub
Price: $2.99 USD
Buy Add to Library Give as a Gift
How gifting works
Create Widget
Tags: grief atheism skepticism humanism atheist mortality grief and bereavement grief loss and acceptance atheist thought atheists guide
About Greta Christina

You have subscribed to alerts for Greta Christina.

You have been added to Greta Christina's favorite list.

You can also sign-up to receive email notifications whenever Greta Christina releases a new book.