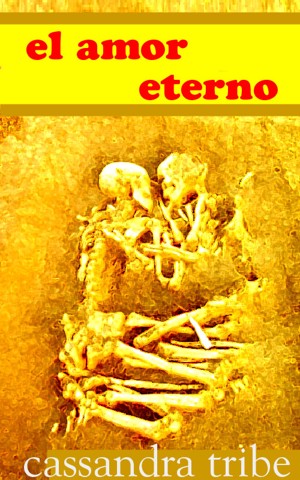 Cassandra Nina Tribe was born October 5, 1968, in Poughkeepsie, New York. She graduated from the Rhode Island School of Design in 1989. After graduating Tribe worked as the Creative Director for Tantalus, Inc., developing Multi-Player Games and GUI interfaces for the Internet. She worked with the ASCII Corporation to develop multi-user interfaces for libraries and the then new concept of on-line shopping, was scenario author for the sequel to The Kingdom of Drakkar, Judgment: Phoenix and director for Empire Builder and Operation:Market-Garden.

In 1992, Tribe left civilian life to join the military and served as an MP with the 8th US Army in Korea. She received an honorable discharge after three years of service in Korea and became a member of the International Brotherhood of Structural, Ornamental, and Reinforcing Ironworkers before leaving the field to become a full time writer, editor and critic.

Cassandra Tribe is considered one of the top 100 performance poets of the century and is included in numerous encyclopedias and dictionaries as part of the example and definition of Spoken Word. Her work has been published in four languages in books, magazines and ezines and she has performed worldwide. Her performance videos have won critical acclaim and been featured in retrospectives and film festivals worldwide. Her CDs and audio recordings are widely available including "Angel", recipient of the 2009 GrIndie award for best Independent Spoken Word album and the 2008 Musta Musta Golden Pen award for her poem, Monster. She has taught variations of her writing workshops of the Sublime, Writing Your Self into Life, Poetry of the Heart and the Art of Performance around the world and is currently in the process of bringing them into the online learning environment.

Her recorded works include: the Garden of Lost Things, the House of Weddings, and Angel. Her books include: the greedy heart, the Demon of Providence, el corazon avaro, Angels Down Below, Feast of Bones, the Madness of Desire and Uncomfortable Longing. Additionally she has published numerous essays and critical reviews on poetry and writing in journals internationally.

Her work as a human rights activist, social theorist and speaker on the nature of society and individual has earned her numerous awards. She holds a BFA from the Rhode Island School of Design and Masters in Divinity, Sociology and Social Work, and Civil Engineering. Cassandra is also a Pastoral Care Specialist, Thanatologist and Clinical Hypnotherapist. She has been a guest speaker at Brown University, Rhode Island College, World College and numerous private institutions. Her applied philosophy, Corism, is developed and distributed under the title, Eat Not the Heart. Her theoretical and applied essays have been published in Living Well with Montel, The Journal of Modern Living, Epicurious and New World Hope and other philosophy, living and social theory journals worldwide.

Cassandra Tribe is the senior pastor of Grace Independent and is also the founder and director of The Little Flower Presents (Artist Feature Series). She hosts Sunday Radio on blogtalkradio.com and her online workshops are currently being released at onlineworkshops.ws and on the loveandwords mobile site (loveandwords.mobi).

You can find her video releases on youtube and a revolving selection of the texts of her work at loveandwords (including the demon of providence, Monster, the Madness of Desire and the soon to be released, The Executioner's Song). Her blog, loveandwords, is carried on over 64 social sites. Cassandra Tribe lives in Providence, RI and teaches privately.

You have subscribed to alerts for Cassandra Tribe.

You have been added to Cassandra Tribe's favorite list.

You can also sign-up to receive email notifications whenever Cassandra Tribe releases a new book.