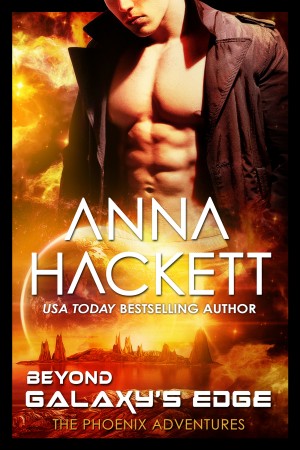 Justyn Phoenix embraces life and offers everyone a wink and a smile. He’s also in love with a spit-and-polish Patrol captain. Yep, crazy in love, and he knows she’ll never love him back. But when the opportunity arises to work alongside Nissa on a wild and crazy mission to recover the US Constitution, he can’t resist.

But nothing on this treasure hunt is as it seems. The trail leads them to fake documents, rival treasure hunters, and a millennia old mystery. As the hunt takes them beyond the galaxy’s edge, Justyn and Nissa will face the firestorm of their desire, and soon learn if they can survive long enough to save the galaxy.

I'm a USA Today bestselling romance author who’s passionate about fast-paced, emotion-filled contemporary and sci-fi romance. I love writing about people overcoming unbeatable odds and achieving seemingly impossible goals. I like to believe it’s possible for all of us to do the same.

For a free box set of my books, visit my website at www.annahackettbooks.com.

About the Series: Phoenix Adventures

The Phoenix Adventures series is set far into the future where Earth as we know it no longer exists and treasure hunters and astro-archeologists vie for valuable old Earth artifacts. There's action, adventure, treasure hunts and more adventure!

The most (in)famous treasure hunters in the galaxy are the dashing Phoenix brothers: Dathan, Zayn and Niklas. If you're looking for adventure, then come aboard and strap in, these boys move fast, live life to the fullest, and are sinfully sexy!

You have subscribed to alerts for Anna Hackett.

You have been added to Anna Hackett's favorite list.

You can also sign-up to receive email notifications whenever Anna Hackett releases a new book.